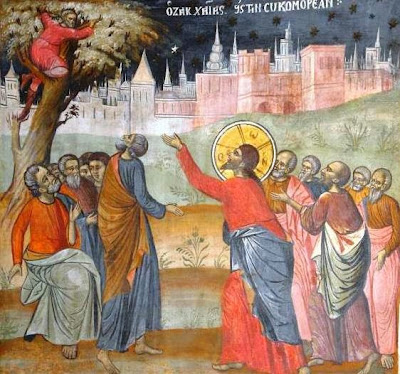 Zacchaeus was not a good person—or so it seems. Though the image of the short man climbing a tree to get above the crowd may be charming or even comical, Luke tells us that he was both a tax collector and a wealthy man. In themselves, those are not evil designations. However, tax collectors in the time of Jesus were generally loathed because they worked on behalf of the Roman governors at the expense of their own people. Presumably, a tax collector was more concerned with his own wealth and status than the welfare of his kinfolk and countrymen.

What’s more, Zacchaeus was exceedingly wealthy because he was corrupt (as verse eight indicates). He was a swindler, taking from his own people more than what they owed to his foreign employers in order to stuff his own money pouch. Living under Roman rule was harsh enough for the Israelites; tax collectors (themselves Israelites!) like Zacchaeus added insult to injury. Anyone who profits from the misery of others is detestable.

Yet something inside this detestable man wanted to see Jesus. Surely, Zacchaeus had heard about the good things this man called Jesus had been doing. Like so many others, he was drawn toward him—if for no other reason than simple curiosity. So he climbed the tree.

This was enough to get Jesus’ attention. However tiny may have been the single speck of goodness within Zacchaeus’ greedy heart, Jesus acknowledged it. He recognized Zacchaeus’ action for what it was—a sincere desire to seek the good. In a moment of grace, Jesus calls out to this seeking heart by name: “Zacchaeus, come down quickly, for today I must stay at your house.” The tax collector could have waved him off and refused to come down from the tree, but instead, Zacchaeus responds to this in-breaking of grace: “He came down quickly and received [Jesus] with joy.”

What is being portrayed here is conversion—something which is always initiated by God but which also must involve a willing response. Zacchaeus responded to Jesus’ call and joyfully received him. As a result of this profound encounter with the Messiah, Zacchaeus vows to make amends for his avaricious life—giving half of his holdings to the poor and also repaying four times over those he had extorted (which went far beyond the demands of the Law). Zacchaeus’ moral compass shifts toward the goodness he encounters in Jesus, who had acknowledged the goodness (however meager) in him. Notice also that this onset of moral rectitude follows rather than prompts the encounter with God’s grace. It is the natural response to grace, which is never earned—a key distinction we all do well to heed.

Jesus does not excuse Zacchaeus’ crooked ways. Neither does he condemn. He simply appeals to the goodness he knows still exists at the core of the tax collector’s being. And for Zacchaeus, this changes everything. His inherent goodness as a child of God is rediscovered and affirmed. What was lost has been found. This fills him with joy, and greed is transformed into exceeding generosity. “The Son of Man has come to seek and to save what was lost,” says Jesus, fulfilling his earlier parable (Luke 15:1-7) of the shepherd seeking the one lost sheep out of 100.

Seeking the good leads Zacchaeus, who is not living a good life, to Jesus, who is Goodness Himself. Jesus seeks the good which he knows is within Zacchaeus, whose goodness then beautifully unfolds and blooms extravagantly—outdoing his previous ways. Why does this happen? Perhaps today’s first reading from the Book of Wisdom holds the key:


[Lord], you love all things that are, and loathe nothing that you have made; for what you hated you would not have fashioned. … You spare all things, because they are yours, O Lord and lover of souls, for your imperishable spirit is in all things.

Despite the distortion in human nature caused and perpetuated by the Fall, we are each created in the divine image of God, who is good. The Love of God manifested in Jesus seeks to hold up that mirror of goodness for us to gaze upon so that we may rediscover our true value and spend it accordingly. Wherever we may be and whatever we may be doing, Jesus calls us by name at every moment, encouraging us to receive him with joy and be the good we seek and rediscover in him.

And part of being the good involves holding that same mirror up for all the Zacchaeuses in today’s world. We must not be like those in the crowd in today’s Gospel, grumbling because all we can see in another is a sinner. Like Jesus, we must seek the good, the imperishable spirit in all things, because as the Body of Christ, we ourselves are commissioned to seek and save what is lost.