"Blessed are the poor in spirit,
for theirs is the kingdom of heaven."
Matthew 5:3 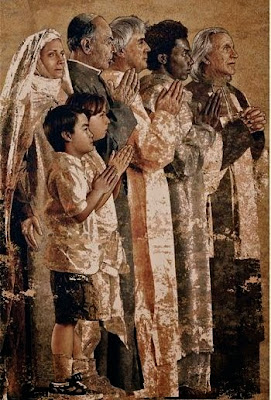 
In his Wednesday general audience this week, Pope Francis focused on the Communion of Saints, an article of the Creed that we profess at the Eucharist every Sunday and Solemnity. The saints have always been controversial. In the popular understanding they are men and women who have corrected all moral flaws, and above all, have erased every offensive personality quirk. No wonder they are prime fodder for detractors of religion who believe in the far more evident dark side of human nature.

But the true saints are not those who have done everything correctly and never made mistakes; they are people who have learned to accept the gift of life from the Source of all good gifts, God himself, and in doing so have uncovered a lasting happiness in the midst of life’s hardships.

And the Communion of these Saints is founded in Christ. It is not the result of valiant individual efforts at sanctity, but rather it is the fruit of the Paschal Mystery by which Christ has redeemed our human nature despite its flaws and with all its quirks. Today’s feast celebrates a real communion born of faith in the One in whom we have been made a new creation.

The crowd that heard the Beatitudes from Jesus on that hillside was filled with people for whom the hope of holiness and redemption seemed far off. Yet to them Jesus brought the consolation of God’s Kingdom, not as a distant dream, but as a real communion for their everyday lives. He was not promising the poor and the miserable and the sad and the cheated some better life after death; instead he opened their eyes to the power of God that can and does change everything here and now. “Blessed are the poor in spirit, for theirs is the kingdom of heaven”— his words spoke of the present. If the beatitudes had only been about consolation offered after death, then Jesus would have emptied the world of God’s saving presence.

The Kingdom of heaven is at hand, making hoped-for relief attainable. Jesus called the poor, the hungry, the weeping, blessed—not because their weeping, hunger, and poverty were good things, but because God’s intervention NOW allowed them to experience salvation in a measure beyond all telling, although not without opposition from forces intent on maintaining the status quo. Jesus was put to death for something more than just his beautiful words.

To the crowd that had gathered to hear his word, he offered the fascination of the Kingdom, which demanded a change in who rules in this world. Through him God banished the isolation of sin and gathered the poor, the miserable, the sad, and the cheated into a people of his own choosing. To them belonged the faces of saints, made so by the gift of communion.

The power of God to save touches every age, ours included. As part of the communion of saints, the Church is the community of those who live out the Beatitudes through their lives of Christian faith. We who believe in the power of Christ’s death and resurrection, made present to us here at this Eucharist, have been initiated into a community of saints established by the Risen Christ. This way of life is God’s gift to us. It numbers us among that vast multitude envisioned by John in the Book of Revelation, from every nation, race, people and tongue, who know that salvation comes from God.

The voice of God calls to us daily in our Christian and monastic life and opens our eyes to see the hope of heaven in every circumstance of our life here on earth. We not only hope for a future life in heaven, but we believe that in our communion in Christ heaven already is breaking in on us. Its effect is as close now as the warmth of a lover’s breath against one’s cheek, a nearness that makes the heart race and the skin tingle, leaving us certain that the only thing yet left to come is the kiss.

Such faith numbers us among that vast multitude from every nation, race, people and tongue whose lives the Reign of God has changed by the power of love.

[Friday's] feast of All Saints is a celebration of God’s Kingdom pressing in on men and women of every age, our own included. It assures us of a place in the great heavenly procession when we accept the gift of grace and then live accordingly. If we are to know the real joy of the Beatitudes, then we dare not fail to become what we celebrate in this Eucharist: Christ’s body broken and his blood poured out for the life of the world. It is our communion with the vast multitude of saints in their eternal happiness.
Posted by Br. Francis de Sales Wagner at 8:00 AM