The truth of human dignity 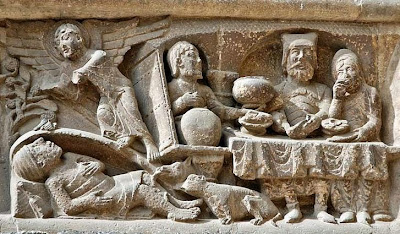 We cannot stand idly by, enjoying our own riches and freedom, if, in any place the Lazarus of [today] stands at our doors. In the light of the parable of Christ, riches and freedom mean a special responsibility. Riches and freedom create a special obligation. And so, in the name of the solidarity that binds us all together in a common humanity, I again proclaim the dignity of every human person: the rich man and Lazarus are both human beings, both of them equally created in the image and likeness of God, both of them equally redeemed by Christ, at a great price, the price of the ‘precious blood of Christ’ (1Peter 1:19).

So, if you are the “rich man” in today’s Gospel, who is the “Lazarus” in your life, and how might you recognize in him or her your common human dignity?
And, if you are Lazarus in today’s Gospel, may your lot be relieved by those with the means. Whatever the case might be, “Blessed are you who are poor, for yours is the .”
Posted by Br. Francis de Sales Wagner at 7:48 PM No comments: 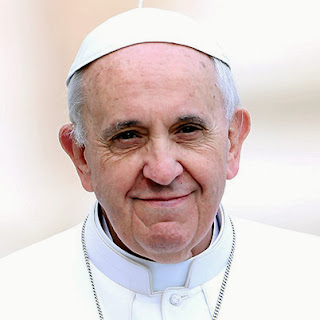 “Thanks to magnanimity, we can always look at the horizon from the position where we are. That means being able to do the little things of every day with a big heart open to God and to others. That means being able to appreciate the small things inside large horizons, those of the kingdom of God. This offers parameters to assume a correct position for discernment, in order to hear the things of God from God’s ‘point of view.’ … [However] the risk in seeking and finding God in all things, then, is the willingness to explain too much, to say with human certainty and arrogance: ‘God is here.’ We will find only a god that fits our measure. The correct attitude is that of St. Augustine: seek God to find him, and find God to keep searching for God forever.”﻿

NOTE: By now, surely you've heard about Pope Francis' lengthy personal interview with a number of Jesuit publications around the world, including America magazine. The quote above is excerpted from that interview. If you haven't done so already, please seriously consider reading the entire interview. It is well worth it. Don't rely on the regular news media to summarize and spin its content for you. Context is everything. This man conveys a solid message consistent with the Gospel which goes far beyond the political and cultural issues of the day and strikes at the very core of humanity's being. As the pastor of a church I was visiting in Cincinnati told his parishioners on Sunday, "If you do only one thing this week for the good of your spiritual life, read this." Click here for a PDF version of the interview from Thinking Faith, the online journal of the British Jesuits (it's the same interview as that in America). Print it out, read it, and keep it.  -- Br. Francis
Posted by Br. Francis de Sales Wagner at 1:54 PM No comments:


Greetings! I know it's been quite some time since I posted here, but it's been an awfully busy few months. Besides the day-to-day common life and prayer of a Benedictine monk and my regular work at the Abbey Press, I have been immersed in a large book project here at the Press (more on that in a moment), classwork, oblate conference preparations, and in working with several spiritual directees. However, things seem to have eased up and evened out for now, so I plan on resuming more regular posting to the blog. Thanks for your patience and prayers.

Speaking of blogs, the book project I have been working on is a large collection of many of the posts I have had both here and at my previous blog (The Yoke of Christ) from 2009 to 2013. Most are scriptural reflections that have been adapted, rewritten, and organized into chapters under various themes dealing with the spiritual life. The title of the book is Grace in the Wilderness: Reflections on God's Sustaining Word Along Life's Journey. It is scheduled for release in November, so stay tuned on that front...

By then, hopefully, the Cincinnati Reds will be Major League Baseball World Champions. Last night, they clinched a playoff berth. Then again, so did those pesky Pirates and wearisome Cardinals. They must be dealt with in a way that is right and just. Go Reds!
Posted by Br. Francis de Sales Wagner at 1:17 PM No comments:

Standing in need of grace 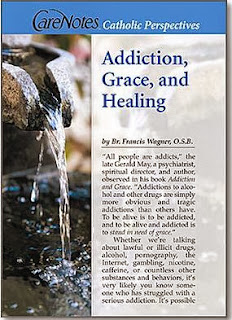 "All people are addicts," the late Gerald May, a psychiatrist, spiritual director, and author observed in his book Addiction and Grace. "Addictions to alcohol and other drugs are simply more obvious and tragic addictions than others have. To be alive is to be addicted, and to be alive and addicted is to stand in need of grace."

Whether we're talking about lawful or illicit drugs, alcohol, pornography, the Internet, gambling, nicotine, caffeine, or countless other substances and behaviors, it's very likely you know someone who has struggled with serious addiction. It's possible that you have dealt with a serious addiction yourself. And if we're honest, we can all identify addictive patterns of behavior within ourselves.

Whatever the case may be, acknowledging and coming to terms with one's own underlying brokenness is the key to breaking the cycle of addiction and setting out on the path of healing. The last phrase of May's observation points the way. It is only when we acknowledge that we stand in need of grace that healing and redemption become possible...