"Because he himself was tested through what he suffered,
he is able to help those who are being tested.
Hebrews 2:18 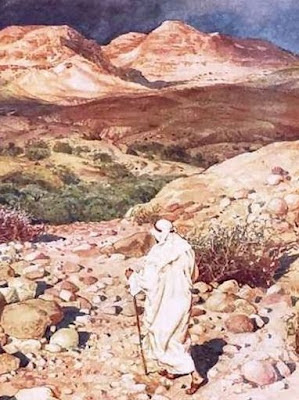 Path of Reflection through Scripture
First Week of Lent
Gospel for Sunday, Feb. 26, 2012: Mark 1:12-15
Read it here
The significance of the Gospel passage for this first Sunday of Lent is best considered in light of what immediately precedes it (Mark 1:9-11), and what the combined passages signify in the context of salvation history stretching back to both the Creation and the Exodus.
In Genesis, the mighty wind of God’s breath, or Spirit, moves over the dark and watery chaos to give shape and order to heaven and earth. Later, after God breathes the same life-giving spirit into the man he has formed in his own image from clay, Adam (Adama or “ground” in Hebrew), lives among the beasts in the perfectly ordered wilderness of . We all know what happens shortly thereafter. Hundreds of years later, Moses leads God’s chosen people out of slavery and into the desert on a journey to the Promised Land.
In Mark 1:9-11, Jesus emerges from his baptism in the waters of the as the Holy Spirit descends upon him in the form of a dove and the Father’s voice announces him as Son of God. A new creation. In today’s Gospel, the same Spirit drives Jesus out into the desert or wilderness, where he lives among the wild beasts and is tempted by Satan. A new exodus.
In the universal desert of the human journey, Jesus—God made man, the new Adam—encounters both good and evil, struggle, and temptation. But angels also minister to him, and he faithfully emerges from the battle we all fight to proclaim the gospel of God, and ultimately, to die on a cross and then rise again to new life.
The message: We are NOT alone !!! Emmanuel (God with us) has not left us to fend for ourselves, despite all indications to the contrary. Through the Church, his Spirit continues to reveal his presence, offer us new life, and lead us through the desert to the Promised Land. Along the way, angels minister to us. Everyday details have eternal significance. The divine presence is everywhere. Every day offers a sacred way.
"The Kingdom of God IS at hand," Jesus says.
So, if you are baptized in the name of the Father, the Son, and the Holy Spirit, where are you in this picture?
***

Our pilgrimage on earth cannot be exempt from trial. We progress by means of trial. No one knows himself except through trial, or receives a crown except after victory, or strives except against an enemy or temptations. The one who cries from the ends of the earth is in anguish, but is not left on his own. Christ chose to foreshadow us, who are his body, by means of his body, in which he has died, risen and ascended into heaven, so that the members of his body may hope to follow where their head has gone before.
He made us one with him when he chose to be tempted by Satan. We have heard in the gospel how the Lord Jesus Christ was tempted by the devil in the wilderness. Certainly Christ was tempted by the devil. In Christ you were tempted, for Christ received his flesh from your nature, but by his power gained salvation for you.
If in Christ we have been tempted, in him we overcome the devil. See yourself as tempted in him, and see yourself as victorious in him.