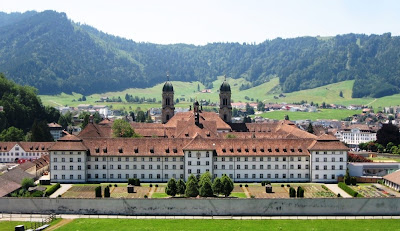 While we at Saint Meinrad are marking the passing of death to life of Fr. Donald and Fr. Eric in recent days, we have learned that two monks of our motherhouse in have also died this past week. Einsiedeln’s Br. Stephan Rüttimann and Konrad Hinder were both in their late 70s.
The latter’s passing, in particular, was quite unexpected. Br. Konrad, a very vigorous man, was the sacristan at Einsiedeln, and also served as gardener and weatherman. I remember him well from my trip to in 2010. At that time, I recall that he rode his bicycle along with several younger monks all the way from Einsiedeln to Freudenfels (on ) where several of us stayed for a week. (The rest of us went by car like normal people, a drive of a couple hours). By bicycle, that’s a four- or five-hour trip at least, through rolling terrain. When he arrived at Freudenfels, he instantly came to the door of the room where I was staying, shook my hand, and with a big smile said, “Willkommen bei Freudenfels!”
I rarely understood a word he said, but he was always very welcoming, hospitable, and helpful. May both he and Br. Stephan rest in peace.
Your continued prayers are also requested for Abbot Martin of Einsiedeln, who is recovering from a serious head injury suffered in a sporting accident a couple weeks ago. Thomas Fässler of Einsiedeln, who is here studying at Saint Meinrad, has relayed to us news from home that Abbot Martin is undergoing therapy at a rehabilitation clinic in . He is slowly making progress, particularly in terms of physical mobility, but still finds it difficult to speak or write.
And while you’re at it, please pray for more vocations at Einsiedeln. There is currently only one junior monk and no novices. Humbly ask the Lord to send more laborers for the harvest, and to protect and guide those already laboring in his vineyard at Einsiedeln.
Posted by Br. Francis de Sales Wagner at 7:34 AM