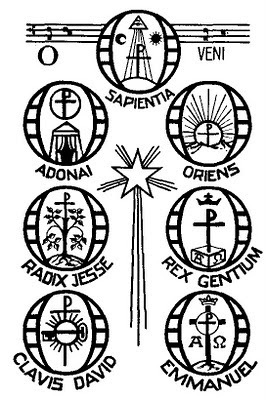 Last year at this time, I posted the ancient “O” Antiphons on my former blog, The Yoke of Christ. This year, I thought I would pull them over to my new one. As I mentioned last year, Advent, with its hopeful longing, is probably my favorite liturgical season of the year. This is especially the case the week before Christmas when we begin chanting the ancient “O Antiphons” each evening at Vespers before and after the Magnificat. This will begin with Vespers on Saturday—tomorrow evening.
The seven antiphons—one for each day preceding the vigil of Christmas from December 17 to  December 23—are called “O” antiphons because each one begins with “O”. The opening words for each day’s antiphon are (in Latin, followed by English):

Each antiphon calls on the Messiah by one of his titles from Scripture and ends with a specific petition imploring the Lord to come. Included are numerous references to the prophecy of Isaiah on the coming of the Messiah.

And, the first initial of each Latin term, read from the last title to the first (Emmanuel, Rex, Oriens, Clavis, Radix, Adonai, Sapientia) form an acrostic, the Latin words ero cras, which means, “I will come tomorrow.” So, in essence, the seven-day period of calling on the Messiah by his various titles ends just before Christmas with God’s response coming from the other direction: “I will come tomorrow.” Thus, there is a palpable swelling of anticipation leading up to Christmas Eve and the coming of Jesus our Savior, God with us.

To sing or hear each antiphon being chanted is quite beautiful. To be quite honest, when you’re a monk, chanting in choir four times a day, seven days a week, can sometimes be about as unromantic as anything else one does day after day. However, when special times like that of the “O” Antiphons kick in, everyone picks it up a notch, and there is a level of intensity and heartfelt warmth that seem to lift voice and mind simultaneously into the heavens. There is nothing quite like it, and I wish everyone had the opportunity to experience or participate in it at least once.

Barring that, however, each antiphon is a short, rich little prayer unto itself, and is worthy of reciting and meditating on as a personal prayer. So, from Saturday until Dec. 23, each day I will post here the precise text of each “O” Antiphon that we chant in the . Accompanying the antiphons will be a series of contemporary paintings by Sr. Ansgar Holmberg, CSJ, of the Sisters of St. Joseph of Carondelet in . Each piece, presenting the Christ-event from a woman’s point of view, is very colorful, unique, and contemplative.

I invite you to allow the antiphons and accompanying images to embrace your longing for the coming of Christ in each and every human heart, beginning with your own.
Posted by Br. Francis de Sales Wagner at 7:26 AM