Last weekend, I had the opportunity for the very first time to visit , where I was scheduled to give a conference to our oblate chapter. Though is a six- or seven-hour drive to the south, there are some significant ties with Saint Meinrad Archabbey. Retired Indianapolis Archbishop Daniel Buechlein, a Benedictine monk of Saint Meinrad, was bishop in for several years before being named archbishop of (he has now returned to the monastery). In addition, Fr. Denis Robinson, O.S.B., a monk of our house and the current president-rector of the Seminary and of here, was parochial vicar of the Cathedral of the Immaculate Conception in for several years before coming to Saint Meinrad to become a monk in 1997. And, of course, we have a very committed oblate chapter in .
The oblates in —particularly Gail Chambers and Noe Longoria—were exceptional models of Benedictine hospitality during my two-day stay. Besides their gracious generosity and good company, I was treated to a little sightseeing and some of the best food I’ve had in quite some time.
When the trip was being planned several months ago, I was asked what I would like to see as a first-time visitor to so that arrangements could be made.
With hestitation, my first response was NOT Beale Street.
NOT Sun Studio (where Elvis Presley, Johnny Cash, Jerry Lee Lewis, Carl Perkins, and Roy Orbison made their first recordings).
NOT .
.
NOT one of ’ myriad restaurants offering mouth-watering barbeque.
NOT the Memphis Zoo, of Art, or the Pink Palace Musuem (featuring a replica of the original Piggly Wiggly store, the first self-service grocery store and forerunner of the supermarket).
﻿﻿﻿﻿﻿No, more than anything else, I wanted to see the Peabody Ducks at the historic Peabody Hotel in downtown . Yes, I am strange that way. I was interested in some of the other things, too, but the was first on my list. In my mind, I could not go to and NOT see the Peabody Ducks. That was unfathomable to me.
So, I did stroll down Beale Street, and I did visit a museum (more on that at a later date).
And, of course, I did partake of Memphis’ culinary delights, including the Bar-B-Q Shop in Midtown (home of the Dancing Pigs), and The Flying Fish downtown, which also boasts the world’s first Billy Bass Adoption Center. If you bring in your old Big Mouth Billy Bass (remember those mounted rubber fish from the 1990s that, with a press of a button, began flapping and singing kitschy songs like “Take Me to the River”?), the restaurant staff will take it from you, mount it on the wall, and treat you to a free fish dinner. There are hundreds of Billy Bass retirees on the wall. I guess that’s one way to get those things out of circulation. Good food and community service all in one.
However, my very first stop was the Peabody Hotel. If you’re not familiar with the Peabody Ducks (shame on you!), here is a brief synopsis:
The is a historic, first-class (expensive) hotel in with a large Italian marble fountain in the middle of its expansive lobby. During the day, the fountain is occupied by five North American Mallard ducks, one drake (male) and four hens (females). These are not your ordinary ducks. They are royalty. Each day at 11 a.m., they are escorted by the official Duckmaster from the hotel roof where they live (in the ), into the elevator, and then to the lobby, where a red carpet is rolled out for them. Then the ducks, quite famously, march like the royalty they are to the fountain, where they swim and frolic all day (royally, of course). At 5 p.m. the Duckmaster returns, and the process is reversed.
﻿﻿
HUNDREDS of people show up to watch this—EVERY DAY, TWICE A DAY. Enthusiastic children and adults line up outside the lobby elevator hours beforehand to capture a prime duck-watching spot. There are even very stern-looking security guards dressed up like Secret Service agents (complete with radio earpieces) who monitor everything. "Please step off the red carpet. Sir, you’ll have to find a seat. There is no standing in the lobby."

It’s a long tradition which got its start as a joke in the early 1930s when the ’s general manager and a friend returned from a hunting (drinking) trip and released several live duck decoys into the fountain. The ducks were a huge hit. In 1940, hotel bellman Edward Pembroke (a former circus animal trainer), offered to escort the ducks to the fountain each day and train them the art of the Peabody Duck March. Mr. Pembroke was the first Duckmaster—a position he held for 50 years (!!!) until his retirement in 1991.

Celebrities from all over the world visit the to see these ducks. Some have been granted the status of Honorary Duckmaster (oh, what a dream!).
The ducks themselves have been guests on The Tonight Show, Oprah, and have been featured in the Sports Illustrated Swimsuit Issue (I kid you not). They are raised by an area farmer, and each team of five stays at the for only three months before retiring and returning to the farm to live as distinguished emeritus.
So, of course, Chez Philippe, the Peabody Hotel’s restaurant, does not serve duck, making it the only French restaurant in the world without duck on the menu.
Now, I ask you, considering all of that, why would I NOT want to see the Peabody Ducks first and foremost?
I enjoyed every moment of it. Posted here are some photos from the visit to the and elsewhere in . You’ll notice, by the way, that there aren’t any pictures of the ducks actually marching to the fountain. I tried. With all the assembled people and the logistics of the lobby, it’s a difficult task. Besides, once those ducks step off the elevator, they waste no time heading to the fountain. No autographs, please.
Later this week, I’ll post something further on another destination of mine in which reflects a less pleasant side of the city’s history. For now, a few more scenes from downtown Memphis: 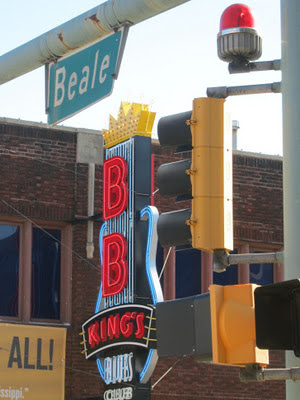 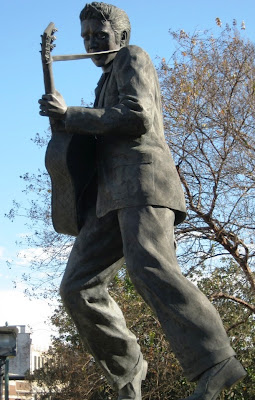