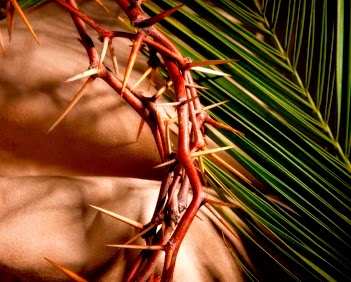 NOTE: Each week during Lent, I am posting a reflection on the Sunday Gospel--a little food for prayerful thought. -- Br. Francis.


***
As a child attending the Mass of the Lord’s Passion on Palm Sunday, I was struck by the remarkable dissonance of two things: At the beginning, the congregation holds palm branches and sings, “Hosanna to the Son of David; blessed is he who comes in the name of the Lord, the King of Israel. Hosanna in the highest,” while commemorating Jesus’ entry into Jerusalem. Perhaps 20 minutes later (more or less), the same congregation, with upheld fists (figuratively speaking), cries out in unison, “Crucify him!” during the Passion account.

As an adult, that still makes me uncomfortable—and it should.

Meditating on this year’s account of the Passion for Palm Sunday (Mark 14:1 – 15:47), one cannot help but notice the instances of outright cruelty to which Jesus is subjected by his enemies. Motivated by jealousy, fear, and ignorance, they testify falsely against him, strike him, scourge him, spit on him, mock him, and taunt him, before finally killing him. Such things, unfortunately, can be expected of enemies.

But what of Jesus’ friends and followers—how are they portrayed? Judas betrays him, hands Jesus over to his enemies, seemingly motivated by greed. He is “one of the Twelve,” as Mark tells us repeatedly, which means he was an apostle, hand-picked by Jesus to accompany and assist him in his mission. These Twelve spent a lot of time together with Jesus, and knew each other well. Judas was a member of the “inner circle,” and is described by Jesus as, “one of the Twelve, the one who dips with me into the dish.”

Led by Peter, the other eleven apostles vow that they will stand by Jesus come what may—even if it costs them their very lives. They are quite sincere in this resolution when they object to Jesus’ prediction that “all of you will have your faith shaken.” Almost immediately, Jesus’ words prove true. His three closest companions—Peter, James, and John—cannot stay awake in the garden of Gethsemane to console and comfort Jesus, who confides in them, “my soul is sorrowful even to death.” Three times, he asks them to keep watch with him, and three times they fail their sorrowful friend in his need.

After Judas leads Jesus’ enemies to him (betraying him with a kiss, no less), and Jesus is taken into custody, arises what I think is the most disheartening statement in the whole account: They all left him and fled. Surely, no one could expect Jesus’ followers to have taken on the armed mob in defense of their teacher. But true disciples, true friends, would surely at least remain by Jesus’ side during his ordeal, even if they were helpless to change his lot—wouldn’t they? And yet, out of fear for their own lives, and despite their earlier promises, they all abandoned Jesus when things got rough for him. I imagine this cut Jesus to the heart—all his friends and followers left him utterly alone in the grip of his tormentors (in human terms, at least; he was, of course, always in the Father’s hands).

A little later, Peter, the apostle whom Jesus had earlier called “the rock [upon which] I will build my church” (Matthew 16:18), denies even knowing Jesus—not once or twice, but three times.

Then, of course, there is the crowd before Pontius Pilate, pleading with the Roman governor to release a hardened criminal rather than Jesus. “Crucify him!” they shout. I can’t help but wonder how many people in this crowd on Good Friday, thirsting (for whatever reason) for the self-proclaimed Messiah’s blood, also were among those on Palm Sunday singing, “Hosanna! Blessed is he who comes in the name of the Lord!” More than a few, I’d wager.

And so the drama continues to this very day. It seems to me that even the “best” of Christians are studies in contradiction. We are Jesus’ present-day disciples, followers, and friends, all chosen by him. We profess Christ, we claim to adore Christ, and even preach Christ. And yet, with the same mouth with which we “bless the Lord and Father,”  “we curse human beings who are made in the likeness of God. From the same mouth come blessing and cursing” (James 3:9-10).

Motivated by various factors, just like those followers of Jesus 2,000 years ago, we choose evil over good, or fail to do the Christian thing in our actions and interactions with one another. We betray Christ in one another, we fail to “keep watch” with Christ for one another, we abandon Christ in one another. In multiple ways, given the choice, we deny even knowing Christ, and yes, at times, we even shout unconsciously, “Crucify him!” Even though we’ve vowed to follow Christ to the death, we’d really rather do things our own way, look out for Number One. We all do this, each and every day—and we are not Jesus’ enemies, but consider ourselves his friends!

Even so, at the foot of the Cross, hope springs from some unlikely sources after Jesus breathes his last. A centurion—i.e., a pagan, an “enemy”—has a revelation. “Truly, this man was the Son of God!” he proclaims. Several women, those who “had followed him” and “ministered to him,” remain present at the scene—one that Jesus’ male followers had long since abandoned. Then, Joseph of Arimathea—according to Mark’s Gospel, a member of the very Sanhedrin that had condemned Jesus—summons the courage to ask for Jesus’ body and has it laid in a tomb, where several women keep watch. According to the various gospel accounts, it is these women who, three days later, bring news of Jesus’ resurrection to the Eleven apostles (who require considerable convincing).

It is these tiny seeds of faith that are watered by Jesus’ blood shed on the Cross, the blood of which Jesus told his sincere but unfaithful friends at the Last Supper, “This is my blood of the covenant, which will be shed for many. Amen, I say to you, I shall not drink again the fruit of the vine until the day when I drink it new in the kingdom of God” (Mark 14:24-25). And they all drank from the cup with Jesus—all those who would eventually betray him, fail him, abandon him, and deny him. All those, who through the power of the Holy Spirit, would later become fearless pillars of the church.

On this Palm Sunday, and as we begin Holy Week, let us gratefully reflect on this mystery of our faith—those of us who drink from the same cup, who call ourselves disciples, followers, and friends of Jesus. The tension of “Hosanna!” and “Crucify him!” will be there, to be sure. Yet, this only serves to remind us of our absolute need for salvation. Let us present that need to Jesus, as did Peter and the other apostles, and trust in God’s undying mercy. As St. Paul writes, “God proves his love for us in that while we were still sinners Christ died for us” (Romans 5:8).

Mysteriously, the very blood Christ sheds on the Cross as a result of our sins is the blood that saves us. God gives his very life for ours. If we truly believe in this Love, we will be transformed by it as were Jesus’ very first friends and followers. What’s more, we will be transformed into it. The piercing thorns become lush palm branches on the Tree of Life.