God fights for us 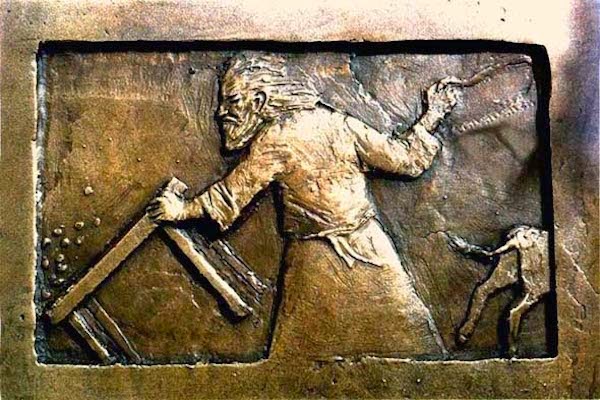 NOTE: Each week during Lent, I will post a reflection on the Sunday Gospel--a little food for prayerful thought to go along with our fasting. -- Br. Francis.


***
I recall that, as a child, I was disturbed by a televised depiction of Jesus cleansing the Temple, which we hear about in the Gospel reading for the Third Sunday of Lent (John 2:13-25). If you imagine the scene as it is described, it is certainly startling—especially for an impressionable child. Jesus “made a whip out of cords and drove them all out of the temple area … and spilled the coins of the money changers and overturned their tables.” This is a fierce, angry, violent Jesus—not the image most of us have of him, and not one with which we feel very comfortable.

Yet, there it is, plainly spoken and recorded as the Word of God in Scripture (each of the four gospels mentions the incident). What are we to make of this?

First of all, it should be mentioned that the prevalent, modern notion of Jesus as an easy-going, sentimental fellow who came to bestow a few words of wisdom and generate universal esteem is not scriptural in the least, and highly mistaken. As Jesus himself declared, “Do you think that I have come to establish peace on the earth? No, I tell you, but rather division” (Luke 12:51).

Jesus was human as well as divine. He experienced emotions. He felt very deeply, and this is demonstrated many times throughout the gospels (e.g., John 11:35). Additionally, Jesus is no pushover. He is provocative. In word and in deed, he both amazes and confuses. With repentant sinners and faithful but erring disciples, he is always gentle but firm. But with self-righteous hypocrites and the indifferent, he is confrontational, constantly challenging the status quo. He is mercy and justice personified, and will not stand for corruption, deceit, and oppression. He preaches detachment from the world, self-sacrificial love of God and neighbor, and he calls us to follow his lead:

“For this I was born and for this I came into the world, to testify to the truth. Everyone who belongs to the truth listens to my voice” (John 18:37).

Moreover, he comes to save us, to fight for us, at the cost of his own life. He was willing to pay the cumulative price of humanity’s misery brought on by the Fall. The Word made Flesh allows himself to be killed by the very creation he spoke into being, so that he may save humanity from the condemnation it chose for itself in turning away from God. He becomes sin (cf. 2 Corinthians 5:21) to save us from sin:

“Just as Moses lifted up the serpent in the desert [a reference to Numbers 21:9], so must the Son of Man be lifted up, so that everyone who believes in him may have eternal life. For God so loved the world that he gave his only Son, so that everyone who believes in him might not perish but might have eternal life. For God did not send his Son into the world to condemn the world, but that the world might be saved through him” (John 3:14-17).

Like an action-hero, this is one tough, righteous dude. Jesus is a warrior who overcomes the forces of evil for those who believe, just as the Lord fought for the ancient Israelites against the Egyptians by leading his people through the Red Sea on dry land (cf. Exodus 14:13-14).

This is what he was doing when he cleansed the Temple in Jerusalem by driving out the merchants and money-changers, charging, “Stop making my Father’s house a marketplace.” Here, he professes his identify, asserts his authority, and reclaims his Father’s house from those who dishonored it by profiting from the poor, and by taking presumptuous refuge in external (yet hollow) observances.

Chiefly, Jesus was sending a message to the religious authorities of his time (and ours). They didn’t like this message, to say the least. This incident, more than any other, leads to Jesus’ death. Here was a man claiming to be God and challenging the age-old practices of Temple worship. From the vantage point of the religious authorities, he had to be taken out of the picture. And seemingly, he was—very briefly.

Jesus was fighting for us as worshipers of God in spirit and truth (cf. John 4:23-24). Zeal for God consumed him (a reference to Psalm 69:10), as the Gospel passage for the Third Sunday of Lent states. More than anything, however, he was declaring his intention to replace the mere external observances of Temple worship with his very body. “Destroy this temple and in three days I will raise it up,” he declares (it is significant that all that transpires around the time of Passover, the feast commemorating the release of the ancient Israelites from slavery in Egypt after literally being spared through the blood of a lamb). On Easter Sunday, Jesus keeps this promise, demonstrating that God intends to save those who believe through his very body—the same body of Christ we share through the sacraments and constitute as the Church.

In other words, God wants not merely external worship, which is bound to corrode and corrupt in and of itself. Instead, he desires an honest relationship with each of us—lived from the heart. Externals are not ends in themselves (nor are they to be excluded!), but are to flow outward from this inner space reserved for God alone—the Spirit dwelling within the sanctuary of our souls (cf. 1 Corinthians 3:16).

God’s zeal for us strives to drive away all that prevents us from entering into a true relationship with him, so much so that he claims each person’s heart for himself. He destroys our “false temples” and raises instead the Body of Christ, of which we are all members as baptized Christians, to be with him in heaven forever.

You might say that Jesus “takes the bullet” for us, and draws us to, and through, himself into a transformed state of being that death cannot touch. In a sense, it’s similar to the heroic self-sacrifice made by Clint Eastwood’s charter in the climactic scene of the movie “Gran Torino” (only on a much grander scale, obviously, and with an eschatological perspective; for an eight-minute video of Fr. Robert Barron’s commentary on this precise point as it relates to the movie, click here).

This is what Jesus was doing as he cleansed the Temple. He was inviting and guaranteeing his eventual fate—so that, in turn, we might be saved from what separates us from God. And he does it with zeal, which is nothing less than passion—intense love for humankind. As a human being, God fights for us—to the death—in order to share his divine life with us.

This is an adult Jesus, for mature audiences only. This requires putting aside “childish things” (cf. 1 Corinthians 13:11), and learning to accept this immense zeal, passion, love that God has for us. This is difficult to do. Even the first disciples, as the Gospel passage indicates, did not understand at first what Jesus was doing. More to the point, we all find it difficult to allow ourselves to be the one in need of saving. It’s much easier to cling to externals, remain indifferent, or to operate under the illusion that we are in control.

This Gospel passage—this Lent, this faith of ours—reminds us that God fights for us. Victory is assured—but only if we embrace it. May Christ turn the tables on our souls, so that his zeal may become ours, now and forever.  Believe it or not, God thinks we’re worth it.
Posted by Br. Francis de Sales Wagner at 2:08 PM