Mary, our partner in prayer 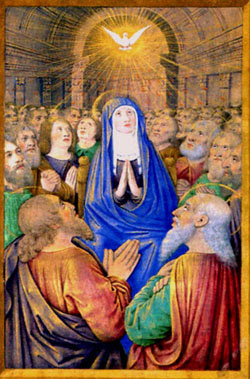 The reflection I gave this afternoon at the Monte Cassino Shrine:

Most of us have said these things—or something similar—at one time or another. They are expressions of faith in a God who cares for us, but they also communicate the hope we have in one another as believers. We draw strength from knowing that we are united with one another in prayer. So we keep prayer lists. We form prayer chains. We join prayer groups. We participate in pilgrimages such as this at Monte Cassino Shrine. And, of course, we come together in the Liturgy—especially the Eucharist—to pray for the world as the Body of Christ and offer ourselves as a spiritual sacrifice. We believe Jesus’ words in Matthew’s Gospel (18:20): “Where two or three are gathered in my name, I am there among them.”

Whether we pray together or alone, of course, we do so as the faithful on earth in communion with one another, but also with the saints in heaven and the souls in purgatory. We are never really alone. We are all partners in prayer, imploring the gifts of the Holy Spirit, drawing strength from Christ, and seeking guidance during our earthly journey toward God the Father.

When we pray the rosary—either individually or as a group—we certainly honor Mary, the Mother of Jesus, and the Mother of the Church, the Body of Christ. When we pray the Hail Mary, we acclaim the Mother of God using the words spoken by the angel Gabriel at the Annunciation, and those addressed to her by her cousin Elizabeth at the Visitation. We also ask her to pray for us, saying, “Pray for us sinners now and at the hour of our death.” Mary is certainly our foremost partner in prayer.

However, we do not simply pray to her, asking her to intercede for us. We also pray with her as the first Christian disciples did—as recounted above in the reading from the Acts of the Apostles. Mary prays with us, directing our gaze toward Christ, and preparing us for the continual outpouring of the Holy Spirit upon all the members of the Body of Christ. After the risen Jesus had ascended to the Father, all the Apostles, along with some women, Mary, and other relatives of Jesus, went back to Jerusalem to the Upper Room—the same room where Jesus instituted the Eucharist during the Last Supper the night before he died on the Cross. There, we are told, “all these devoted themselves with one accord to prayer.” Mary prayed with all of them as they awaited Jesus’ promise to send the Holy Spirit upon them.

Later, during the feast of Pentecost, we are told that “they were all in one place together,” and “they were all filled with the Holy Spirit,” which enabled them to proclaim the Good News.

Mary had already been overshadowed by the Holy Spirit at the Incarnation. She had been with Jesus from the moment of his conception to his last breath. The rest of the disciples, however, had not yet received the Holy Spirit. They were still waiting, and were not sure what to expect. Imagine their confusion and anxiety considering all that had happened in the preceding days—the Crucifixion of their Teacher, his Resurrection, his post-Resurrection appearances to them, his command to “go and make disciples of all nations” (Matthew 28:20), and his Ascension. They were not sure what it all meant, or how they should respond. They were afraid, the Gospel of John tells us.

Already a recipient of the Holy Spirit and the perfect model of faithfulness to God’s Word, Mary remained with the Apostles and other disciples to strengthen and prepare them for what lay ahead. As Blessed Pope John Paul II said during a general audience in 1997, “Unlike those in the Upper Room who were waiting in fearful expectation, Mary, fully aware of the importance of her Son’s promise to the disciples, helped the community to be well-disposed to the coming of the Paraclete.” She was involved “in preparing the minds and hearts of those around her.”

She was their partner in prayer, and remains so for us.

The reading from the Acts of the Apostles is the last mention of Mary in the New Testament. She was the only follower of Christ who was with him at every stage of his life—from conception and birth to his death, and now his new birth in the first community of believers who will carry on his work in the world as the Church. As John Paul II said, “Mary's prayer has particular significance in the Christian community: It fosters the coming of the Spirit, imploring his action in the hearts of the disciples and in the world. Just as in the Incarnation, the Spirit had formed the physical body of Christ in her virginal womb, now in the Upper Room the same Spirit comes down to give life to the Mystical Body” (May 28, 1997, general audience). … “As Mother of the Church, Mary ‘continually brings to birth children for the Mystical Body of her Son. She does so through her intercession, imploring upon them the inexhaustible outpouring of the Spirit” (2002 Encyclical Rosarium Virginis Mariae).

Mary is our partner in prayer—from the moment of our birth in Christ at Baptism until the hour of our death. She prays not only for us, but with us, just as she did with the first community of believers in the Upper Room at Pentecost.

To illustrate this point further, let us take a very brief look at one episode from each of the four sets of mysteries of the rosary. We’ve already examined Pentecost, the third Glorious Mystery. If we turn to the Visitation, the second Joyful Mystery, we encounter Elizabeth crying out with joy as the child John leaps in her womb at Mary’s greeting (Luke 1:39-55). Mary, who had come to assist in her old age in giving birth to John the Baptist, responds to her cousin with the words of the Magnificat, the ancient hymn from the Gospel of Luke which we sing each evening at Vespers. As John Paul II wrote (Encyclical Redemptoris Mater), the Magnificat is an “inspired profession of faith, in which Mary’s response to the revealed word is expressed with the religious and poetical exultation of her whole being toward God. The Church, which even amid trials and tribulations does not cease repeating with Mary the words of the Magnificat, is sustained by the power of God’s truth.” As we can see, Mary was not only physically present to . She was also spiritually present, praying with her--and that prayer continues through the ages in the voices of people everywhere who pray the Magnificat.

In the Wedding Feast at , the second Luminous Mystery of the Rosary, “Mary places herself between her son and mankind in the reality of their wants, needs, and sufferings” when she tells Jesus that “they have no wine” (John 2:1-5). Also, when she says to the servants, “Do whatever he tells you,” Mary “presents herself as the spokeswoman of her son’s will” (Redemptoris Mater). Here again, Mary prays with the people, presenting their needs to Jesus, and conveying to them how important it is to listen to him.

Finally, at the Crucifixion, the fifth Sorrowful Mystery, Mary and the beloved disciple stand with Jesus who has been nailed to the Cross. Jesus says to Mary, “Behold your son,” and to the beloved disciple, “Behold your mother” (John 19:26-27). Here, he entrusts all disciples to Mary, and calls all disciples to honor Mary as Mother of the Church. In essence, he makes them prayer partners.

Aspects of intercession or partnership are evident in all four of these mysteries—the Visitation, the Wedding Feast at , the Crucifixion, and Pentecost. If we look more closely at each one of them, we can see that Mary makes herself prayer partners with four distinct groups of people. In the Visitation, it is relatives. At the Wedding Feast at , it is friends. At the Crucifixion, it is family—both physically and spiritually. And at Pentecost, it is the entire community of believers. Mary joins herself in prayer to all these people—both at that time and right now. She prays with and for relatives, friends, families, and the entire Church.

We participate as partners in prayer through the reading of Scripture and through praying the Rosary—which Mary, in essence, recited through the very experiences of her life. We pray with Mary in the secret recesses of our hearts, pondering as she did the unfolding of these mysteries in our own lives. And we pray with Mary in the Liturgy, such as at the Divine Office during the singing of the Magnificat, and especially at the Eucharist. We must recall that through the Incarnation, when the Holy Spirit first descended upon Mary, Jesus, the Word made Flesh, received his earthly flesh and blood from her. It is this same humanity he gives to us sacramentally during the celebration of the Eucharist. “She who had lived in close union with Jesus in the house of Nazareth now lives in the Church in intimate communion with her Son, present in the Eucharist” (Paul Haffner, The Mystery of Mary).

All of this points to the timeless nature of Mary’s prayer. Pentecost was not a one-time event in the history of salvation. “Pentecost is still happening,” said John Paul II in a homily in 1980. “Every place where the disciples of the Lord gather is an extension of that original [Pentecost].” As the Second Vatican Council’s Lumen Gentium stated, “The entire body of the faithful pours forth instant supplications to the Mother of God and Mother of men that she, who aided the beginnings of the Church by her prayers, may now … intercede before her Son in the fellowship of all the saints, until all families of people, whether they are honored with the title of Christian or whether they still do not know the Savior, may be happily gathered together in peace and harmony into one people of God” (LG 69).

So, Mary remains with us as our partner in prayer--today and each day of our earthly sojourn. “In our time, she is no less present to the Church than she was at Pentecost, gathered with the Apostles in prayer. With her prayer and presence, she will surely support the new evangelization just as she supported the first. In times of difficulty and pain, Mary has been an unfailing refuge for those seeking peace and healing. In churches, chapels and homes, the image of Mary reminds people of her loving presence and her maternal protection” (Pope John Paul II, Ecclesia in Oceania).

Like the first Christians, let us devote ourselves to prayer together with Mary, the mother of Jesus. Let us make Mary our prayer partner, praying not only to her but with her as we contemplate the mysteries of Christ. Let us place ourselves in the Upper Room at Pentecost, imploring the gifts of the Holy Spirit, so that “the prayer of the Church is sustained by the prayer of Mary and united with it in hope” (Catechism of the Catholic Church 2679).

Let us say together: “Mary, pray for us.”

… And believe in our hearts that she is saying to us: “I’ll pray for you.”