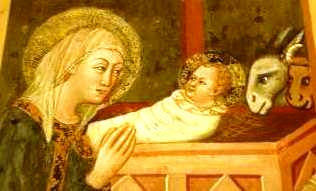 We proclaim the holy Virgin to be in strict truth the Mother of God. For inasmuch as he who was born of her was true God, she who bore the true God incarnate is the true Mother of God. For we hold that God was born of her, not implying that the divinity of the Word received from her the beginning of its being, but meaning that God the Word himself, who was begotten of the Father timelessly before the ages, and was with the Father and the Spirit without beginning through eternity, took up his abode in these last days for the sake of our salvation in the Virgin’s womb, and was without change made flesh and born of her.
For the holy Virgin did not give birth to mere man but to true God: and not only God but God incarnate, who did not bring down his body from heaven, nor simply passed through the Virgin as a channel, but received flesh from her, of like essence to our own and subsisting in himself.
For if the body had come down from heaven and had not partaken of our nature, what would have been the use of his becoming man? For the purpose of God the Word becoming man was that the very same nature, which had sinned and fallen and become corrupted, should triumph over the deceiving tyrant and so be freed from corruption.

"God became man
so that man might become god."
St. Athanasius
Posted by Br. Francis de Sales Wagner at 9:29 AM