Saint Meinrad, pray for us 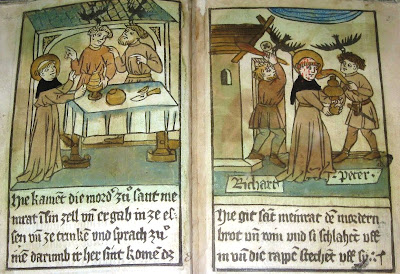 Today we celebrate the feast of Saint Meinrad--hermit and holy martyr. He is often called the "Martyr of Hospitality," a virtue held dear by Benedictine monks. Upon the site of the hermitage (Einsiedeln in German) where he was killed by two robbers in 861 was built the venerable monastery of Einsiedeln in Switzerland. Centuries later, the monks of Einsiedeln establised an American foundation--Saint Meinrad Archabbey in southern Indiana. Pictured above is a 15th-Century block book from Einsiedeln's library on the Life of St. Meinrad. The artwork depicts the martyr's death. Notice the two ravens, which are part of the insignia for Einsiedeln--and Saint Meinrad Archabbey. Click here if you would like to read an English translation of a 10th-Century Latin account of the life and death of St. Meinrad.

NOTE: On this feast of Saint Meinrad, please pray for the monks of the Abbey of Einsiedeln in Switzerland, especially Abbot Martin Werlen, who suffered a serious head injury in a sporting accident last week. And to our brethren at Einsiedeln: Gottes Frieden!

Posted by Br. Francis de Sales Wagner at 4:32 AM