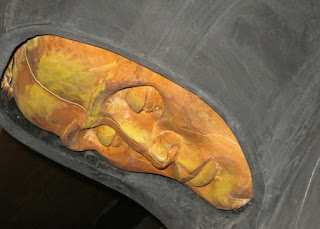 My apologies for the shortage of blog postings lately. It's been fairly busy around here. In April and May, I had a good number of oblate chapter meetings to attend in both Ohio and Indiana--several of them involving overnight stays. Last week, we monks had our community retreat (I delivered the last conference on Friday morning, so had to prepare that). Immediately after the retreat ended, we resumed preparations for the upcoming abbatial election later this week with a couple of final community meetings exploring the present and possible future states of the monastery.

This week will also be busy, and historically significant, as we elect the 10th abbot of Saint Meinrad Archabbey (click here for a photo listing of previous abbots). The process actually began early this year, shortly after Archabbot Justin DuVall announced his resignation in January (click here for Archabbot Justin's bio). This has included a number of community meetings to discuss who we are as a community of Benedictine monks and where we are headed, table reading selections addressing the election of an abbot, and special prayers (Eucharistic adoration, general intercessions during liturgies, etc.). As secretary to the Archabbot, I also have had responsibilities related to the election preparations -- mostly from a canonical standpoint regarding documentation.

The capitulars (solemnly professed monks with chapter voting rights) will begin with the actual election tomorrow afternoon, May 31, when we will hold the first part of what is called a scrutinium. At this first meeting, we will (behind closed doors) suggest the names of monks we think should be at least considered as possible candidates. On Wednesday morning, June 1, the second part of the scrutinium will involve the opportunity for everyone (again, behind closed doors, with the monks named Tuesday absented) to offer observations on each of the potential candidates. That afternoon, the canonical pre-election meeting will be held, with the Abbot President of the Swiss-American Congregation presiding. For the most part, this will involve an explanation of all the logistics.

Then, on Thursday morning, June 2, after a Mass of the Holy Spirit at 7:30 a.m. in the Archabbey Church, the capitulars will convene at 9 a.m. in the Chapter Room for the actual balloting. Capitulars are not limited to voting only for those named in the scrutinium. Any monk who is at least 35 years old, is a priest, and has been solemnly professed at least five years is eligible to become abbot.

So, at some point on Thursday, we should have a new archabbot. Once one is selected, of course, there will be a flurry of activity on the Hill, including the ringing of all six church bells, official notification of various individuals and institutions regarding the new abbot, community photo, etc. Remember, that this is the first time this has all happened here since December of 2004.

From June 2 onward, of course, I will need to assist the new abbot--whomever he may be--get acclimated to his new position. I already have a big pile of things needing his immediate attention! It's also certainly possible that I may be reassigned myself to another position. We shall see.

The official blessing of the new abbot is tentatively scheduled for July 26. Things will get busy around that time as well, because on August 1 we all plan to move out of Anselm Hall and back into the monastery which has been under renovation this past year. Also coming in August--God willing--will be a simple profession and three solemn professions of monks.

When things begin to settle down a bit, I hope to resume more regular blog postings.

In the meantime, please keep Archabbot Justin (soon to be known simply as Fr. Justin) in your prayers as he moves on to a new chapter in his monastic journey, and also this entire community as we elect his successor this week. The summer around here will be busier than usual for a lot of reasons, so we could use your prayers all around.

The following is a prayer I composed a couple months ago based on chapters 2 and 64 of the Rule of St. Benedict:

as we prepare to elect a new abbot,
who holds the place of Christ in the monastery,
guide us by your Holy Spirit to select someone
who never teaches or decrees or commands
apart from your will.

Help him to be a good and faithful shepherd
of this flock, and help us to follow.
Help him to teach and lead
more by example than by words.
Help him to be fair, equitable, and just,
showing equal love to everyone.

Let him be discerning, prudent, and flexible
while leading his flock—being either stern or tender,
as the circumstance may warrant.

Always remembering what he is called,
and aware that more is expected
of one to whom more has been entrusted,
may he direct souls as appropriate.
May he accommodate and adapt himself
to each one’s character and intelligence,
so that he will not only keep the flock
from dwindling, but may also rejoice in its increase.

May he always seek first the Kingdom of God,
not showing too great a concern
for the fleeting and temporal things of this world,
while keeping in mind that he has undertaken
the care of souls for whom he must give an account.
Let him also be mindful of his own faults.

Help us to use sound judgment
in selecting a new abbot,
considering above all goodness of life
and wisdom in teaching.

May our new abbot keep in mind
the nature of the burden
he will have received,
and to whom he will have to give
an account of his stewardship.
Let him always seek what is best
for his monks, and not for himself.

May we choose an abbot who:

-- Is learned in divine law, and who is chaste, temperate, and merciful.

-- Hates faults but loves the brothers.

-- Distrusts his own frailty and remembers “not to crush the bruised reed.”

-- Strives to be loved rather than feared.

May we choose an abbot who is not:

But, rather, one who:

-- Arranges everything so that the strong have something to yearn for and the weak nothing to run from.

-- Above all, keeps the Holy Rule in every particular after the pattern of Christ, our Good Shepherd.