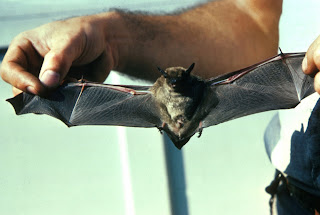 St. Benedict instructs us monks in his Rule that “all guests who present themselves are to be welcomed as Christ.” I wonder if all guests include bats—of the sinister-looking, webbed-wing variety? Monday evening and Tuesday morning, you see, one presented himself in my monastery room, and I was not so hospitable. I certainly didn’t welcome the flying rodent as Christ.

I awoke around 11:30 p.m. Monday to the sound of my window blinds violently slapping against the window panes (my third-floor windows were closed). Naturally, I turned on the light, and as I did, there was a dull thump as something hit my window sill. Slowly, a tiny winged claw reached out from behind the blinds. In another few seconds, he was disentangled from the blinds, pausing on the sill, surely surprised (as I was) that he was perched there. Then he took flight, round and round about my room, just below the high ceiling.

Not amused, I ran into the bathroom and closed the door to consider the situation and plot my strategy. How did he get in, and how do I get him out? Not very hospitable, I know, but his was a rather rude entrance.

Placing a towel over my head, I opened the bathroom door a crack and peeked out. He was still there, flapping round about the room, no doubt distressed and dropping guano everywhere. Quickly, I dashed over to the window. Ah, there was the problem. The top sash had unnoticeably slipped down over time, leaving a small gap. That explained the strange array of insects I had discovered in my room the past few weeks. As you know, bugs and bats don’t need much space to squeeze through after getting a foot in the door, so to speak—or in this case, a webbed wing in the window blinds.

Surely, this bat had been foraging outside, and decided to have a late-night snack on some delectable insect near, or on, the outside of my window when he suddenly found himself lodged in the gap between the sashes. Struggling to free himself and surely disoriented, he ended up on the other side—my side—of the window instead.

OK, that’s how he got in. Now, how do I get him out? After lifting the top sash to its proper position (like closing the barn door after the horses are out, I know), I threw open the bottom sash as well, and then lifted the screen. After turning off all the lights in the room, I ran again for cover in the bathroom. My theory was that using his powers of echolocation, the bat would discover the window space open to the night and fly out to freedom. More than 25 years ago, living in Galion, Ohio, I had successfully employed this strategy in my second-story apartment one evening after I fell asleep on the couch with the balcony door open.

I pondered all this as I sat on the toilet in my bathroom around midnight, flipping through a magazine while I waited for the little rascal to depart. Every few minutes, I poked my towel-covered head out into the room to see if he had accepted my invitation to leave. Nope, still there. … Nope, still there. … Holy Bat Logic, still there! At one point, I thought he was gone because there was no flapping movement in the room, but then I looked up into a corner of the room, and there he was, hanging upside-down and glaring at me daringly.

As far as I was concerned, I had been more than fair. Quickly, I closed the window, pulled the covers up over my bed to guano-proof it (again, closing the barn door…), retrieved a broom from the closet down the hall and went over to where he was still hanging. I didn’t want to hurt or kill the thing—but was prepared to do just that if needed. If only I could swat or steer him somehow into a waiting box, then quickly snap it shut and take him outside to be let free. It was now past 12:30 a.m., and I needed to get back to bed. So, I began smacking at him with the wide end of the broom—no doubt disturbing my slumbering next-door neighbor. Never coming close, all this accomplished was sending the poor unsightly thing to circling my room again.

Once again, I retreated into the bathroom to review the situation. I figured that he did not fly out when he had the chance because the open window was far below the height at which he was circling, and therefore could not detect the opening. Either that or he was just being mean. Then, in one of my more uncharitable moments, I reached out from the bathroom and opened the door of my room into the hallway. Maybe he would fly out and become someone else’s problem. Once again, though I gave him plenty of time, he didn’t respond to the invitation.

Finally—now it was about 1 a.m.—I watched from the bathroom as he flew up into the air register above the door, remarkably squeezing through the tiny openings of the grille cover. After waiting a good 15-20 minutes to make sure he didn’t come back out, I decided it was safe, closed the hallway door, inspected my bed for guano (none detected), turned off the lights, crawled back under the covers, and mistakenly believed I was going to go back to sleep. Every few minutes, I glanced back toward the air register. And just as I was beginning to drift off, around 1:45 a.m., I heard some metallic scraping and looked up just in time to see a wing appear through the register grille, and then the whole hairy beast, once again circling the room.

Now I was aggravated. The bat must have sensed this, because when I switched the light back on, he immediately retreated into the air register. Can’t say I blame him. It was dark, cool, and relatively safe in there. So, at 2 a.m., I fired up my computer and sent out a service request to our physical facilities department so that they would have it first thing in the morning. “Somehow, I need to get the thing out of here,” I wrote after briefly explaining the circumstances. “Can you help?”

Since I couldn’t sleep anyway, I also checked a few baseball scores and news headlines while online. The bat still had not come back out of the register, so I eventually figured that we had reached some sort of truce. As long as the light stayed on, he would stay up there and out of my living area. Of course, that meant I would have to try to get back to sleep with the lights on (when I had to be up in only a couple more hours).

That’s what I did. In a well-lit room, still a little wound up, drawing up the covers to shield myself from a sneak-guano attack, and glancing uneasily at the air register through drooping eyelids, I finally fell asleep around 2:45 a.m.

Apparently, the cease-fire held. I was not disturbed for the next couple hours, and when I awoke, the bat was nowhere in sight—presumably still hanging somewhere just inside the air duct behind the register grille. Just to be sure, I ruffled all the clothes hanging in my open closet and inspected beneath all my book shelves. Satisfied that my guest was still present in the register but not interested in aggravating me further, I went groggily about my morning of prayer and work, which was full of other—but thankfully, less intense—surprises.

Later, physical facilities co-workers Kenny Sherman and Dave Schuetter extracted the pesky guest from the air register with a ladder, a screwdriver (to remove the grille, not to attack), a thick pair of gloves, pliers, and a net. The bat was a little grumpy, to say the least, but he was alive and well—and most satisfactorily from my point of view, now permanently evicted.

My overnight visitor—or any of his friends—is not welcome back. That may seem inhospitable, but St. Benedict also warns in his Rule about the “gyrovagues, who spend their entire lives drifting from region to region, staying as guests for three or four days in different monasteries.” He seems to suggest that there is a limit to the hospitality one is obligated to extend to such “disgraceful” guests.

In any event, I strongly recommend checking and latching your window sashes.
Posted by Br. Francis de Sales Wagner at 2:32 PM