NOTE: The following is the homily delivered by Fr. Harry Hagan, O.S.B., in the Archabbey Church for the Third Sunday of Lent.

The first reading [Exodus 3:1-8a, 13-15] contains one of the most well-known scenes in the Old Testament. It sticks in people’s minds, and though they may not know the Bible very well, still they know this scene: Moses and the burning bush.

Pasturing his sheep, Moses sees a strange phenomenon—a bush that burns, but is not consumed. He turns aside to this strange thing, but almost immediately he hears God say:
Remove the sandals from your feet,

for the place where you stand is holy ground.

The Hebrew word “holy”—qadosh—means separated out and belonging only to God.

The scene captures the classic marks of an experience of God described by Rudolf Otto in his famous book The Idea of the Holy. Otto says that these experiences are marked by mysterium, tremendum et fascinans. Mysterium is, of course, mysterious, beyond the ordinary and predictable. It includes the completely good, but it points to more that lies beyond the conceptual and explainable.

As for the word tremendum, the English can be a bit misleading. The Latin word comes from the verb tremo—to tremble, to shake, and therefore to be afraid. So, the gerundive tremendum means fearful, terrible, dreadful. There is something frightening about the Holy because it is beyond our control and reminds us that we are creatures. The Holy brings an overwhelming sense of awe.

Finally, the Holy is fascinans—fascinating, enchanting, attractive. Though the Holy may be tremendum, we are still drawn to it; it is fascinans.

In the reading from Exodus, the Lord appears to Moses “in fire flaming out of a bush.”

Fire may well be the quintessential image of the Holy, for it is itself truly mysterium, tremendum et fascinans. Even if you understand the chemistry of combustion, the experience of the flames points you beyond what we can know. The fire is dangerous and can easily get out of control, and yet we love to stare into a fire. It is fascinating.

This year we are not in our monastery, and we have no fireplace for a fire. Other years, you would come through the calefactory early in the morning and see people sitting in the darkness looking at the fire. Mysterium, tremendum et fascinans.

After getting Moses’ attention, the Lord calls and commissions him to go to Pharaoh, but Moses, even though he has had this theophany, objects. In the biblical text, Moses says: “Who am I that I should go to Pharaoh, and bring the Israelites out of Egypt?” Moses does not think much of himself.
However God answers: “I will be with you.”

Moses objects that he does not know the name of God, and so God reveals the divine name: אֶֽהְיֶ֖ה אֲשֶׁ֣ר אֶֽהְיֶ֑ה         -- “I am who am.”

The early Church, with its understanding of Greek philosophy, saw in this name a statement about God’s fullness of being. God is the source of all being.

I do not want to undermine that; still, the Hebrew offers more possibilities. Unlike Greek, which is very precise, Hebrew suggests. You could translate אֶֽהְיֶ֖ה אֲשֶׁ֣ר אֶֽהְיֶ֑ה:

Moses' objections do not end here. They extend into the next chapter. He is afraid the Israelites will not believe him, and so the Lord gives him miracles to work. Then, he says he cannot talk, but by then the divine patience is at an end. God gives him Aaron to speak, but also tells him to get on with it.

In my prophets class, we have been reading about hermeneutics, which is the Greek word for interpretation. We have finally worked our way up to Hans Georg Gadamer. He argues that texts invite us into a dialogue, and in that give-and-take, we find ourselves asking questions, and also find the text posing questions to us. Most importantly, Gadamer insists that we remain open to the challenge posed by the text, for in this give-and-take, according to Gadamer, the text will offer us a door into the truth if we have the courage to open it.

Maybe you would object that you have never seen a burning bush, never had a theophany. But is that true?

Are theophanies just for people in the Bible or should we—you and me—look for them? If God can be whoever he will be, then we should not expect to see a burning bush, exactly. Still, is it possible for you or me to have an experience of the mysterium, tremendum et fascinans?

Surely, the Bible and the tradition say, “Yes!”—we can have that experience. So, what might be a burning bush for us? Where do I find anything that is mysterium, tremendum et fascinans?

For many people, this basic experience of the Holy comes in relationships. If you ever talk to people who are falling in love—really falling in love—they can tell you about mysterium, tremendum et fascinans.

If that is true, then we might ask whether marriage is a burning bush? I have talked to enough married people to say the answer is sometimes yes and sometimes no. Still, sometimes “Yes!” and the marriage, the spouse, become a burning bush.

If you talk to a seminarian or a young monk or a graduate theology student, they will tell you about becoming more and more convinced that they had to go to the seminary or monastery or this school. Like Moses, they may have come kicking and screaming, and they may not be sure just yet how it is going to end, but still they had to come, because somehow they had experienced the mysterium, tremendum et fascinans.

The experience of God does not dispel all of our problems; as with Moses, the theophany may bring infinite complications.

It is Lent. It is the time for seeing visions. The first Sunday of Lent, we heard of Jesus in the desert, and last week was the Transfiguration. It is the time for theophany. Moreover, we are moving toward the passion, death and resurrection of Christ, and his Cross is itself surely a burning bush—for, to those who believe in Christ, death brings a vision of the mysterium, tremendum et fascinans. During this past week, the monastery experienced again this burning bush as we celebrated the passing of Abbot Alan, who, as Fr. John so poignantly said, was a man taken with the severe love of God.

Look for a vision of God this Lent—a vision of the One who said: “I am who am,” “I am who I will be,” “I will be whoever I will be.” Who knows what this burning bush may look like? Who knows how this unpredictable God may appear? Still, be ready to recognize this God made manifest in Christ, for indeed, this unpredictable God shall appear mysterium, tremendum et fascinans. 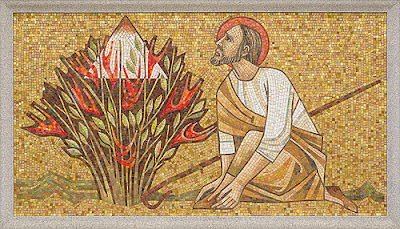 Posted by Br. Francis de Sales Wagner at 4:50 AM