How do deal with difficult people


We all must deal with difficult people from time to time, or even regularly. They're in our families, workplaces, parishes and congregations. They're everywhere--even in monasteries! And, if we are humble enough to be honest, we'll admit that we each encounter one in the mirror every day. All of us are at least occasionally difficult, often due to factors such as stress, fatigue, or ingrained behavior patterns of which we're not even aware. There is a saying that circulates in the monastery from time to time, a reminder of each and every person's brokenness and need for mercy: "On the day you die, at least one person will be relieved." That is true, I believe, for us all.

However, it is also true that there are certain people among us who are chronically, notoriously, and especially difficult. And we have no choice but to find a way to live, work, or otherwise deal with them on a regular basis. Just how do we go about that? We're all pretty good at desiring mercy for ourselves, but it's much more difficult to extend it to others--especially when they seem so undeserving and like, well, total jerks.

The photo above depicts how we often feel about such a person, someone with whom we've simply had it up to here. And it's fine to feel that way. But don't act on that feeling! Either in actions or words. There's too much of that in the world already--either righteous or unrighteous anger begetting more anger and violence. As Scripture says, "Be angry, but do not sin" (Ephesians 4:26).

Instead, in this Year of Mercy promulgated by Pope Francis, let us take our cue from Jesus. He certainly had his share of difficult people with which to contend. Flip through the gospels, and you'll note that it wasn't just the Pharisees who proved a constant source of aggravation. The apostles and even his own relatives and friends could be quite difficult at times. In fact, the instances are quite numerous. 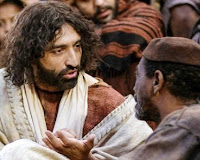 But how did Jesus respond? For this, I invite you to reflect on a wonderfully insightful -- yet short and concise -- article on the subject written by Sr. Theresa Aletheia Noble, FSP, titled "5 Ways Jesus Dealt with Difficult People." You can read it here.

I suggest that what the author outlines would be an excellent Lenten exercise of extending Christlike mercy in ways that are very concrete and possibly life-transforming for all involved. I may incorporate them into my own Lenten observance.

Jesus shows us how to deal with difficult people. As a human being, he surely felt at times like whacking someone upside the head, screaming obscenities, or quietly seething while plotting revenge. But he didn't. As Son of God, he fulfilled the prophecy of Isaiah (42), who wrote:


He will not cry out, nor shout, nor make his voice heard in the street. A bruised reed he will not break, and a dimly burning wick he will not quench. He will faithfully bring forth justice.

What's more, he didn't run away and hide from all the difficult people, even when they badly mistreated him. Rather, he tried, firmly but gently, to engage all people he encountered--simply because he knew that all need healing. He is the Good Shepherd, who says, "I came that they may have life, and have it abundantly" (John 10:10). "For God so loved the world that he gave his only Son, so that everyone who believes in him may not perish but may have eternal life" (John 3:16). He came to save, not destroy. He came to embody mercy.

As Pope Francis writes in his Lenten message this year: "God shows himself ever rich in mercy, ever ready to treat his people with deep tenderness and compassion ... Here is a true love story, in which God plays the role of the betrayed father and husband ... This love story culminates in the incarnation of God's Son. In Christ, the Father pours forth his boundless mercy even to make him 'mercy incarnate.' ... God's mercy transforms human hearts; it enables us, through the experience of a faithful love, to become merciful in turn." (To read Pope Francis' entire message for Lent, click here.)

Jesus, embodying mercy, engages others in all their obstinacy, brokenness, and difficulty. As Sr. Theresa Aletheia illustrates with specific passages from Scripture, he asks challenging questions, he stands his ground, he knows when to walk away, he does not "people-please," and he is flexible. What he does not do is retaliate or close himself off from others. He simply invites--but never forces--others to see the genuine love and concern he has for them. And once someone who is chronically, notoriously, and especially difficult comes to accept and believe in God's love for him or her, despite all acknowledged faults, then mercy has captured another heart. And there are a few instances of such conversions depicted in the gospels.

As Christ's Body, we are called each day to extend the same kind of mercy--even to the most difficult among us. Especially to the most difficult among us. The invitation goes both ways. It comes from the Holy Spirit, and promises life to all difficult persons. And remember, we're all difficult from time. This wonderful gift comes from a God who loves us so much that he literally reduces himself to the point that he literally places himself in our difficult human hands.