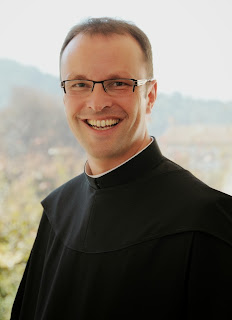 Congratulations and blessings to Fr. Urban Federer, 45, who was recently elected as abbot of Maria Einsiedeln, Saint Meinrad Archabbey’s mother abbey in Switzerland. Einsiedeln’s monastic community elected Fr. Urban to a 12-year term on November 23, a choice that was confirmed this week by Pope Francis.
Fr. Urban is the 59th abbot of Einsiedeln (by comparison, here in Indiana, Archabbot Justin DuVall is the ninth abbot in Saint Meinrad’s history). As abbot, Fr. Urban succeeds Fr. Martin Werlen, who resigned earlier this year. The official installation will take place December 22. Incidentally, both men studied for a time here at Saint Meinrad when they were younger. Both are wonderful persons.
Yesterday at lunch, several confreres at my table were discussing the selection, and one joked that when the new abbot goes on retreat, everyone can refer to it as “urban renewal” (which elicited both groans and chuckles).
If you’d like to practice your German, you can read the official announcement on Einsiedeln’s website here (a translation application may be employed to render a somewhat reliable English facsimile of the text).
Best wishes to the entire monastic community at Einsiedeln—for which, after my visit there in the summer of 2010, I reserve a special place in my heart.
Posted by Br. Francis de Sales Wagner at 8:42 AM