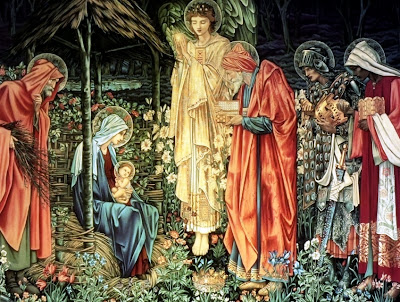 God’s Son did not disdain to become a baby. Although with the passing of the years he moved from infancy to maturity, and although with the triumph of his passion and resurrection all the actions of humility which he undertook for us were finished, Christmas still renews for us the holy childhood of Jesus born of the Virgin Mary. In adoring the birth of our Savior, we find we are celebrating the commencement of our own life, for the birth of Christ is the source of life for Christian people, and the birthday of the Head is the birthday of the Body.
Every individual that is called has his own place, and all the children of the Church are separated from one another by intervals of time. Nevertheless, just as the entire body of the faithful is born in the font of baptism, crucified with Christ in his passion, raised again in his resurrection, and placed at the Father’s right hand in his ascension, so with him are they born in this Nativity.
This is true of any believer in whatever part of the world, that once he is reborn in Christ, he or she abandons the old paths of original sin and passes into a new being by being reborn. He or she is no longer counted as part of an earthly father’s stock but that of the Savior, who became the Son of man in order that we might have the power to be the children of God.
For unless he came down to us in such humility, no one could reach his presence by any merits of his or her own.
The very greatness of the gift conferred demands of us reverence worthy of its splendor. For, as the blessed Apostle teaches, We have received not the spirit of this world but the Spirit which is of God, that we may know the things which are given us by God. That Spirit can in no other way be rightly worshipped, except by offering him that which we received from him.
But in the treasures of the Lord’s bounty, what can be more in keeping with the glory of Christmas than that peace which at the Lord’s Nativity was first proclaimed by the angels?
It is precisely this peace which brings forth the children of God. This peace is the nurse of love and the mother of unity, the rest of the blessed, and our eternal home. This peace has the special task of joining to God those whom it removes from the world.
So, those who are born not of blood, nor of the will of the flesh, nor of the will of man, but of God, must offer to the Father their harmony as children united in peace. All of them, adopted parts of the mystical Body of Christ, must meet in the firstborn of the new creation. He came to do not his own will, but the will of the One who sent him; and so, too, the Father in his gracious favor, has adopted as his heirs not those that are discordant, nor those that are unlike him, but those that are one with him in feeling and in affection. The hearts and minds of those who have been reformed according to one and the same image should be in harmony with one another.
The birthday of the Lord is the birthday of peace: for thus says the Apostle, He is our peace, who made both one; because no matter who we are, through him we have access in one Spirit to the Father.
-- From a sermon by Pope Saint Leo the Great


BEST WISHES
FOR A BLESSED
AND PEACEFUL
NEW YEAR!
Posted by Br. Francis de Sales Wagner at 9:18 AM