"There is a vocation
for suffering with Christ,
and through it the possibility
of being involved in his salvation.
Christ continues to live
and suffer in his members.
The suffering experienced
through union with the Lord
is his suffering, and is a fruitful part
of the great plan of salvation." 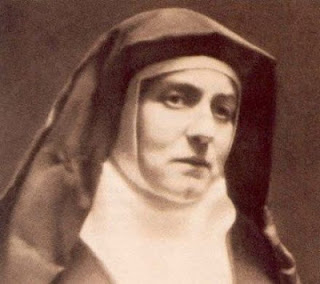 Edith Stein (St. Teresa Benedicta of the Cross) was a German-born Jew who in her teens lost faith in God and embraced atheism. She went on to become an accomplished philosopher, scholar, and teacher. Later undergoing a conversion, she was profoundly moved by reading the autobiography of St. Teresa of Avila, and was baptized Catholic in 1922. When academic pursuits were no longer possible for her under the Nazi regime, she was granted her longtime wish of joining the Carmelite order in Cologne in 1933, taking the name Teresa, Blessed of the Cross.

In 1939, she was smuggled into the Netherlands as the anti-Semitism of the Nazis erupted into World War II. However, she and her sister Rosa, who had also converted and had joined the Carmelites with her in the Netherlands, could not escape the grasp of the expanding Nazi regime, which distrusted all Jewish-born Christians, particularly intellectuals. Edith and Rosa were arrested by the Gestapo Aug. 2, 1942, and along with many other Jews, were taken by cattle car to Auschwitz. A week later, on Aug. 9, 1942, they were among those killed by the Nazis in the gas chamber at Auschwitz.

St. Teresa Benedicta of the Cross was canonized by Blessed Pope John Paul II in 1998. Read more about her life here.

Posted by Br. Francis de Sales Wagner at 7:15 AM