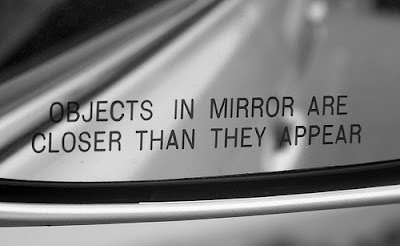 Appearances can indeed deceive. Reality is often disguised, requiring a depth of perception beyond ordinary means. The sun rises in the east and sets in the west each day, seeming to cross from one end of the sky to the other. We know that's not really true, despite all appearances. The sun is stationary. The revolution of the Earth, which in turn orbits the sun, makes it seem as though the sun is moving. In reality, the Earth is moving.

Scientific knowledge helps us understand the universe which we see and live in. The knowledge of faith helps us enter into the mystery of the spiritual reality that underlies and infuses the universe which we see and live in. For Catholics, of course, there is no greater mystery than that of the Eucharist, which is the source and summit of our faith. In the Eucharist, we receive the Body, Blood, Soul, and Divinity of Jesus Christ under the species of ordinary bread and wine. What we see is not all we get. And we get more than we could ever imagine.

This Sunday's Mass readings carry forward the eucharistic themes that have been unfolding for us the last few weeks in the Scripture passages of the Liturgy of the Word. In the first reading, the prophet Elijah is sustained and strengthened for his journey by food and drink provided by God. In the Gospel, Jesus tells a skeptical crowd: "I am the living bread that came down from heaven; whoever eats this bread will live forever; and the bread that I will give is my flesh for the life of the world."

In between, we hear from St. Paul, who conveys to us the true meaning of Communion with God the Father, Son, and Holy Spirit: "All bitterness, fury, anger, shouting, and reviling must be removed from you, along with all malice. And be kind to one another, compassionate, forgiving one another as God has forgiven you in Christ. So be imitators of God, as beloved children, and live in love as Christ loved us." In other words, we receive Christ to become Christs. If we are what we eat, as the saying goes, we must become what, in faith, we receive in the Eucharist, as St. Augustine said: "You are the mystery that is placed on the Lord's table. You receive the mystery that is yourself. To that which you are, you will respond."

Those who confronted Jesus in today's Gospel, murmuring about his claims of being "the bread that came down from heaven," had not yet opened their hearts to receive the knowledge of faith and see the spiritual reality of what he was saying. Their focus was only on what they could see with their own eyes. "Is this not Jesus, the son of Joseph? Do we not know his father and mother? Then how can he say, 'I have come down from heaven'?" They saw only the species in front of them, not the Presence. Appearance deceived them.

People of that time, incidentally, also believed the sun revolved around the Earth. Humanity still had a lot to learn on many different levels. We still do.

In that light, a suitable companion text to meditate on, along with this Sunday's Mass readings, is Mysterium Fidei, Pope Paul VI's 1965 Encyclical on the Holy Eucharist. Below is an excerpt (you can read the encyclical in its entirety here.)

I particularly like the quotation from St. Ambrose at the end of the excerpt.

If the sacred liturgy holds first place in the life of the Church, then the Eucharistic Mystery stands at the heart and center of the liturgy, since it is the font of life that cleanses us and strengthens us to live not for ourselves but for God and to be united to each other by the closest ties of love…By means of the Mystery of the Eucharist, the Sacrifice of the Cross which was once carried out on Calvary is re-enacted in wonderful fashion and is constantly recalled, and its salvific power is applied to the forgiving of the sins we commit each day.

While Eucharistic symbolism is well suited to helping us understand the effect that is proper to this Sacrament—the unity of the Mystical Body—still it does not indicate or explain what it is that makes this Sacrament different from all the others. For the constant teaching that the Catholic Church has passed on, … the very words that Christ used when He instituted the Most Holy Eucharist, all require us to profess that “the Eucharist is the flesh of Our Savior Jesus Christ which suffered for our sins and which the Father in His loving kindness raised again.” To these words of St. Ignatius, we may well add those which Theodore of Mopsuestia, who is a faithful witness to the faith of the Church on this point, addressed to the people: “The Lord did not say: This is symbol of my body, and this is a symbol of my blood, but rather: This is my body and my blood. He teaches us not to look to the nature of what lies before us and is perceived by the senses, because the giving of thanks and the words spoken over it have changed it into flesh and blood.”

The Council of Trent, basing itself on this faith of the Church, “openly and sincerely professes that after the consecration of the bread and wine, Our Lord Jesus Christ, true God and man, is really, truly and substantially contained in the Blessed Sacrament of the Holy Eucharist under the outward appearances of sensible things.” And so Our Savior is present in His humanity not only in His natural manner of existence at the right hand of the Father, but also at the same time in the sacrament of the Eucharist “in a manner of existing that we can hardly express in words but that our minds, illumined by faith, can come to see as possible to God and that we must most firmly believe.”

To avoid any misunderstanding of this type of presence, which goes beyond the laws of nature and constitutes the greatest miracle of its kind, we have to listen with docility to the voice of the teaching and praying Church. Her voice, which constantly echoes the voice of Christ, assures us that the way in which Christ becomes present in this Sacrament is through the conversion of the whole substance of the bread into His body and of the whole substance of the wine into His blood, a unique and truly wonderful conversion that the Catholic Church fittingly and properly calls transubstantiation. As a result of transubstantiation, the species of bread and wine undoubtedly take on a new signification and a new finality, for they are no longer ordinary bread and wine but instead a sign of something sacred and a sign of spiritual food; but they take on this new signification, this new finality, precisely because they contain a new “reality” which we can rightly call ontological. For what now lies beneath the aforementioned species is not what was there before, but something completely different; and not just in the estimation of Church belief but in reality, since once the substance or nature of the bread and wine has been changed into the body and blood of Christ, nothing remains of the bread and the wine except for the species—beneath which Christ is present whole and entire in His physical “reality,” corporeally present, although not in the manner in which bodies are in a place.

St. Ambrose, the Bishop of Milan, in a clear statement on the Eucharistic conversion, has this to say: “Let us be assured that this is not what nature formed but what the blessing has consecrated; and there is greater power in the blessing and in nature, since nature itself is changed through the blessing.” To confirm the truth of this mystery, he recounts many of the miracles described in the Sacred Scriptures, including Christ's birth of the Virgin Mary, and then he turns his mind to the work of creation, concluding this way: “Surely the word of Christ, who could make something that did not exist out of nothing, can change things that do exist into something they were not before. For it is no less extraordinary to give new natures to things than it is to change nature.”
-- Pope Paul VI, Mysterium Fidei

"Now we see in a mirror dimly,
but then we will see face to face.
Now I know in part;
then I will know fully,
even as I am fully known."