"You spread the table before me" 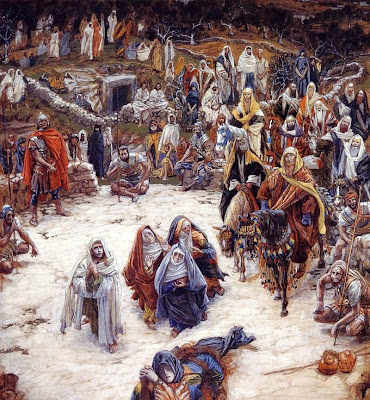 Yes, the world is full of evil. We are divided, scattered, misled, untended, separated from one another and from our Creator. Sin, sweat, and sorrow plague us individually and socially. This has been the case for centuries upon centuries, and will continue to be the case as long as human beings inhabit the earth. We are utterly reprehensible. Who would love us?


God would, and does.


Today’s readings center on Christ the Good Shepherd, who comes among us to gather us back to himself, to guide us, care for us, and to reconcile us with God and one another. As the Letter to the Ephesians states, “He is our peace,” putting our enmity to death by the cross on which he suffered and died. God sacrifices his very self for our salvation because there is no other way to reverse the Fall. Jesus sucks up all that is hideous about humanity into his sinless being, becoming sin itself (cf. 2Corinthians 5:21). Then he exterminates it through his death—offering us everlasting hope through the Resurrection.


This is what he offers us—a free, immeasurable, unattainable gift. It is ours to accept or refuse; and if we choose to accept it, then we must live it daily by our own crosses, giving away our own lives out of love for God and one another—usually in small ways, but sometimes in much more significant fashion.


The key to understanding all this and making it a part of ourselves is the utter compassion Jesus demonstrates in today’s Gospel. First, he tells his exuberant disciples, who are impressed by their own labors, “Come away by yourselves to a deserted place and rest a while.” Later, when he looks out on the vast crowed that has followed them, “his heart was moved with pity for them, for they were like sheep without a shepherd.” So, Jesus begins to teach them, and later, as the Gospel continues, to feed them all from a few scraps of ordinary food—a clear Eucharistic reference.


He is our peace.


Jesus drives this point home from the cross on which he was nailed. From there, he looks out over his fallen, hungry people with compassion, and cries out, “Father, forgive them, for they do not know what they are doing” (Luke 23:34). And just before he hands over his spirit, he says, “It is finished” (John 19:30). Redemption and reconciliation have been accomplished through his beaten, defeated, (seemingly) destroyed body. Power is made perfect in weakness. While chaos still seems to prevail all around us, “all things work together for good for those who love God” (Romans 8:28). New life is breathed into our troubled souls through the blood of the Cross. While the battle threatens to rage on around us and within us, the victory has been won.


He is our peace.


While it is always helpful to gaze upon the Cross to enter into this mystery, it is also worthwhile to consider another perspective—that of Christ’s from the cross. What did he see? What was his viewpoint? Can we place ourselves on the cross and see what he saw? Thousands of artists have depicted the crucifixion in various ways, but in the late 19th-Century, the French painter James Tissot asked these questions, creating the piece pictured above—titled What Our Lord Saw from the Cross. The only parts of Jesus’ body visible are his feet at the very bottom. And looking up at him is a sea of humanity whose feet he washes clean with his very own blood.


From this vantage point, he looks out on the world, on you and me, from the beginning to the end of time, and his heart is moved with pity, for we are like sheep without a shepherd. And he cries out, “Father, forgive them, for they do not know what they are doing.”


He is our peace. It is finished.