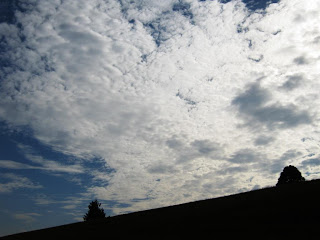 It's probably obvious to at least a few readers that postings here have been relatively infrequent the last few months. That is primarily because I have been concentrating heavily on completing my master's thesis in the School of Theology here. As mentioned in a previous blog post some time ago, my topic was: "Vive Jesus! Saint Francis de Sales' Introduction to the Devout Life and the Universal Call to Holiness." I thoroughly enjoyed the research and writing involved with the project, but after several months of focusing on it, I was ready to be finished.

In any event, the paper was turned in a couple weeks ago, I've emerged from my "writing bunker," and I'm all set to receive my Master of Theological Studies degree at graduation next weekend. So, hopefully, postings here will pick up a little (though in another couple weeks, I will be taking a break for our community retreat, and then vacation).

For now, I am through with school in the conventional sense -- though, obviously, never from the "School of the Lord's service," as St. Benedict refers to the monastery. Late this year and early next, I will be back at it, however, as I undertake studies and practicum toward a graduate certificate in spiritual direction--a new curriculum offering here at Saint Meinrad. I will be one of the "guinea pigs," and am looking forward to it. Spiritual direction is something I have greatly benefited from, and something I was interested in pursuing even before I arrived at the monastery nearly six years ago.

A few people have suggested I go on to pursue a doctorate, but I'm not so sure about that. I will be 47 in September, I like being in the monastery (doctoral studies would take me away for a few years), and the purpose of having a doctorate (in my view) is essentially to be qualified to teach at the graduate level. However, instructing large groups of people--as well as giving extended retreats to large groups, conducting meetings, or even interacting socially with large groups frequently and extensively--is not the forum in which I work best. It also takes more out of me than it does most people. For those familiar with the Myers-Briggs personality assessment, I am one of those rare INFJ's (Introverted-Intuitive-Feeling-Judging), which is a fancy way of saying I draw my energy from within, require more solitude than most, and interact best with people on a small scale and through substantial (rather than casual) means--either one-on-one or in small groups--and of course, in my writing. I am much more comfortable operating "behind the scenes," with room to think and create, and interacting with others individually. So, something like spiritual direction--which fits well with some of the other things I'm doing here--makes a good deal of sense for me, and I am grateful the abbot has given me the opportunity to pursue it. It is also something I firmly believe in (as did my patron, Francis de Sales). Everyone should have a spiritual director, though there aren't enough of them.

All that is not to say that I can rule anything else out in terms of further education. God's will must always be discerned. In any event, it would be up to the abbot. We'll see. For now, I can focus on some of my other responsibilities here--the Abbey Press, giving oblate conferences, etc. I've even begun serving as a spiritual director for a few people, and am already learning a great deal in that respect. Then late this year, I can begin with the official graduate certificate program, which should keep me busy for at least another year. Of course, as I always tell people (and sincerely believe), my primary "work" here as a monk is prayer and our common life. Those areas--for me, anyway--could always stand improvement. At the moment, perhaps, that is where I need to center my attention most securely.

Responsibilities, routines, and daily rhythms are good, but without due discretion and disernment they can also result in "tunnel-vision." Sometimes a new (or rediscovered) perspective is needed for spiritual rejuvenation. We can all tend to get caught up more in what we're doing rather than the more important aspect of why we're doing it. Monks are not immume to this phenomenon.

Perhaps my own "rediscovered perspective" was revealed to me last evening at Vespers. I am filling in this week for Fr. Sean as guestmaster, and part of that job entails assisting guests in the Archabbey Church during Mass and Vespers. Last evening, we had about 50 fourth-graders with us from the Oaks Academy in Indianapolis--all in uniform. I've never seen such a large group of well-behaved, attentive, and beaming children. Just before Vespers, while the rest of the monks were in the monastery slype preparing to process in (this being the feast of saints Philip and James), I was in the church with the students and their adult escorts, along with several other guests. This was a unique vantage point for me -- something removed from my routine. Ordinarily, I'd be lining up with the other monks just outside the church. Looking across the sea of students, one little boy caught my attention. He was literally on the edge of his seat, his head cocked at an angle, a hand cupped to his ear. He had absolutely no idea what to expect--what was going to happen next--but whatever it was, he was ready to see and hear it!

When the bells sounded the 5 o'clock hour, and the monks began processing in (still out of the boy's sight), the lights came up in the church, and the towering organ began playing. The boy's reaction was priceless. His eyes grew wide and lifted upward, his mouth opened in an expression of astonishment, and he turned around--first this way, and then that--to his classmates, as if to say: "Wow, can you hear that?! Can you see that?!" This experience of God was all new to him, and it brought a big smile to my face as the other monks processed past me like we do all the time (but perhaps without the same sense of awe). Without knowing it, this boy had given me a tremendous gift--a renewed appreciation for our awesome God!

A little change in perspective can go a long way. Whatever else I may be doing around here--or for that matter, what any Christian anywhere may be doing--I am called (and we are called) above all else to listen and look for the presence of God, who exceeds all expectations. "Unless you turn and become like children, you will not enter the kingdom of heaven" (Matthew 18:3).