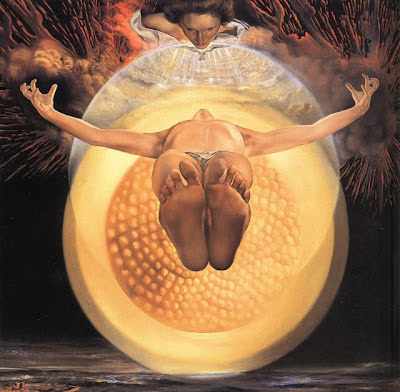 Where is God in all this?

It’s a fair question, one we all ask at times in one way or another. It’s a question we should ask, and which God expects us to ask. Faithful people do ask.

Ah, but we don’t always listen for, or to, the answers, do we?

The Mass readings for today’s Solemnity of the Ascension of the Lord provide some insight. On the surface of things, it seems as though after the Resurrection, Jesus appeared to some of his disciples, and then ascended into heaven, where he remains today. We know he’ll come back, but we don’t know when, and he sure seems to be taking his time about it. So we just wait, right?

In one sense, yes. But in another, more important sense, no. The is both now and not yet. Like a seed planted in the spring, it has sprouted and spread during the long growing season (yes, along with all those nasty weeds and meddling pests around and within us!), but it has not yet reached the time of harvesting. It is here now, but has not yet fully arrived. And like any farmer, we have a part to play in how fruitful the harvest is. God supplies the sun, rain, and the mystery of germination, but we have to cultivate, plant, and prune. The latter is not possible without the former, but it is also necessary for the gift of redemption to bear fruit.

Like anything worth having, it requires some “elbow grease,” but most of all, it involves a choice. As Jesus says in today’s Gospel, “Whoever believes and is baptized will be saved; whoever does not believe will be condemned.” Each moment, we must choose, as today’s second reading states, to “live in a manner worthy of the call you have received.”

However, we are not alone. God does not stand off at a distance to simply watch us wallow in our collective, self-induced wretchedness and misery as we await the Second Coming. It may seem that way sometimes, but reality often eludes perception. Rather, acting from an immense love we cannot begin to comprehend, the Creator of the Universe stooped down to lend a hand in the only way that makes sense. In the person of Christ, he took on himself the humanity we had disfigured by ill-advised choice—which inflicts all measure of the misery we experience in this world. Rather than coolly directing a way out from on high, he rolled up his sleeves and jumped into the fray with us. He doesn’t just provide a solution; he enters the problem—becomes the problem. He transforms humanity from within, something like how a vaccine containing a virus is injected into the body to ward off more virulent strains.

But if that’s true, where is he? Things seem pretty awful. He seems absent. Maybe he was once here, but if he ascended, then we seem to be abandoned.

Therein lies the mystery of the Cross. That’s the vaccine—the death, resurrection, and ascension of a God who became one of us to take us up, lift us up, to a heaven which must begin here on earth, within earthly things. We live in him, and he lives in us, his Body, which sanctifies the sufferings we endure in this world. The Church is that Body, mystically united to the One who awaits us and who is present to us (yes, amid all the weeds and pests). But we are free to choose. No one’s decision is forced. We do, however, have to bear the consequences of our choices, both individually and collectively. We’re in this together. When one part of the Body is sick, the whole Body experiences it.

But the cure is at hand, and it—He—is here. Largeness within smallness. Extraordinary within the ordinary.

In the Holy Spirit, which he promises and bestows on all who believe, so that we, as his Body, may do his works—even greater works than Jesus did (cf. John 14:12)! “You will receive power when the Holy Spirit comes upon you, and you will be my witnesses…to the ends of the earth,” Jesus said before his ascension in today’s first reading. And in the Gospel, he tells us, “Go into the whole world and proclaim the gospel to every creature.”

With the promise of the Holy Spirit, which filled the Church at Pentecost, we have God among us in greater measure than the Apostles did. We encounter him in prayer, in Scripture, in worship and praise, and in the Sacraments—particularly the Eucharist. We encounter him in the practice of virtue, in the charity we express toward one another, in the compassion we show one another, the joy we share, and in the unity and peace for which we strive.

And we encounter him in our sorrows, our grief, doubt, pain, and confusion. In such moments, we call out all the more, we seek God all the more because we have him all the more. We meet him in the Cross that he shares with us, providing us with the way to heaven through our earthly reality.

After Jesus ascended into heaven, we are told in the last verse of Mark's Gospel, he worked with them. From heaven, through the Holy Spirit, he works with us, alongside us, within us, to lead us home for eternity.

Where is God in all this?

Where isn’t he? As Ephesians 1:23 assures us: Christ “fills all things in every way.” In heaven, and on earth.

Now and forever.
Posted by Br. Francis de Sales Wagner at 9:37 AM