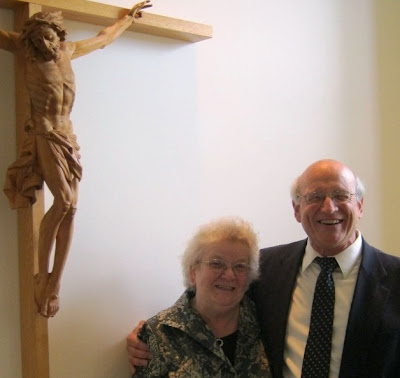 Today, Saint Meinrad Archabbey bid a fond farewell to an institution of sorts--Linus Mundy, director of publications at Abbey Press. He is shown above with his wife Michaeline ("Mikie") after a luncheon in his honor this afternoon.

Linus worked 28 years at the Abbey Press, and an additional 14 at St. Anthony Messenger Press. In the mid-1980s, he came up with the idea of CareNotes, a booklet series to help comfort and care for those struggling with life's toughest challenges, such as grieving the sudden loss of a loved one. Today, more than 150 million CareNotes have been sold to churches, hospitals, funeral homes, and other care providers, who then typically offer the titles free of charge to those under their care. Without a doubt, CareNotes have touched and healed an untold number of hearts.

Linus, an alumnus who has assisted and supported Saint Meinrad in myriad ways, is also an accomplished author (as is Mikie). Among his many works, the 1995 book Prayer Walking: A Simple Path to Body and Soul Fitness garnered national atttention. As director of publications, he also oversaw the development of a number of projects--such as the enormously popular Elf-Help book series--that not only supported the work and prayer of Saint Meinrad Archabbey, but also extended a helping hand to those in need. Among his last endeavours was the successful purchase and redevelopment of Deacon Digest magazine.

Above and beyond all that, however, was the genuine dedication, concern, and good cheer he demonstrated each day toward his co-workers. When I came to the monastery and was assigned to work in the publications division at Abbey Press, Linus helped and supported me in numerous ways. I wrote an Elf-Help book, and several CareNotes (editing many others), and he gave me the opportunity to oversee one avenue of the division's recent growth into other directions--which has led to the Path of Life Publications imprint in my charge.

In retirement, he plans to write, do some part-time consulting and author-promotion work, travel, garden, and of course, spend time with his family. He will be missed at Abbey Press, though I know we haven't seen the last of him on the Hill. His Saint Meinrad roots are sunk fairly deep.

Now climbing into the saddle as the new director of publications is Phil Etienne, who has been the division's managing editor the last couple years, also heading up Deacon Digest. He has worked at Abbey Press since 1989--which, I told him at Linus's luncheon today--was the same year I began working in the newspaper field. You just never know where life's path may take you--best wishes to both Linus and Phil!
Posted by Br. Francis de Sales Wagner at 6:20 PM