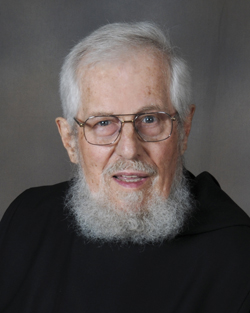 NOTE: As many of you likely know by now, this past weekend we lost a very holy and faithful monk -- Fr. Rupert Ostdick, O.S.B. He was 95 years old (read his full obituary here). Though 95 and suffering from spinal stenosis and degenerative disc disease, Fr. Rupert was still a very active member of the monastic community (he got around on a motorized scooter), rarely missing community prayer times, meals, meetings, and other gatherings. He passed on to his eternal reward quite suddenly early Saturday morning as he was getting dressed in his infirmary room before the beginning of Vigils and Lauds in the Archabbey Church.

Today was his funeral Mass and burial, and below is the homily delivered by Fr. Eugene Hensell, O.S.B. For those of you not fortunate enough to know Fr. Rupert, a few clues to his personality and bearing may make help make more sense of the allusions made in Fr. Eugene's homily. First, Fr. Rupert was a very joyful, gentle, and gracious man, a true gentleman in every sense of the word. He always had a smile for everyone he met, and he never (or rarely) forgot a name. He was also someone who disliked disorder. To put it mildly, Fr Rupert was very precise about everything he did -- from his daily routine to his diction. And like a Timex watch, he took a licking and kept on ticking. When I first arrived at the monastery 10 years ago, one of his arms was in a sling, the result of a serious bicycling accident (he was 85 at the time). When he healed, and I suspect with the Abbot's orders, he switched to a sleek-looking, low-riding tricycle. In the years afterward, there were other falls and mishaps. Once he tripped in the monastery refectory and broke his neck. As he waited for the ambulance in the infirmary, he was dictating, in very precise terms, all the details of his prescription medications for the nurse. Another time, I actually watched him fall down the stairs ahead of me as we walked to church. That didn't stop him either. And on the day he died, he was dressing, as he would any morning, for morning prayer in the Archabbey Church. Fr. Rupert, a good and faithful monk (not to mention tough), was always ready for action. Now, may he rest in peace.

"Be dressed for action and have your lamps lit; be like those who are waiting for their master to return from the wedding banquet, so that they may open the door for him as soon as he comes and knocks. Blessed are those slaves whom the master finds alert when he comes; truly I tell you, he will fasten his belt and have them sit down to eat, and he will come and serve them. If he comes during the middle of the night, or near dawn, and finds them so, blessed are those slaves.
“But know this: if the owner of the house had known at what hour the thief was coming, he would not have let his house be broken into. You also must be ready, for the Son of Man is coming at an unexpected hour.”

Stories about watchfulness and being prepared for the coming of the Son of Man originated at a time in the early Christian Church when expectations were very high that the second coming of Jesus would happen very soon. It did not. Gradually these stories began to be applied to the need of every believer to be prepared for the moment of death: a time when one would meet the Lord face to face. We are admonished, “Be dressed for action and have your lamps lit.” Those who are prepared for the Master when he comes will be treated to a remarkable experience of reversal.  The Master will invite the servants to sit at table and he will serve them. Still, the overall emphasis on being prepared for the unexpected remains the same. “But know this, the Son of Man is coming at an unexpected hour.” Even for that servant who is faithful, there is still very much about the hour of death that is unknown and beyond anyone’s control.

In spite of all this, I would like to suggest that no one tried harder to keep all the unexpected and unknown aspects of both life and death under control than did Fr. Rupert. Obviously, he could not control the actual moment of his death. But that did not deter him in his efforts. He simply opted for second best—to control every aspect of life. Fr. Rupert was a monk and a priest of deep faith and strong convictions. Almost every day of his very long monastic life, he was dressed for action and had his lamps lit. He left nothing to chance. He allowed for no randomness. His entire approach to life might best be described by a phrase taken from a poem by Wallace Stevens. Fr. Rupert had what Stevens refers to as a “Blessed Rage for Order” (Wallace Stevens, The Idea of Order at Key West). Here we must not misunderstand the poet. The word “rage” does not refer to intense anger. That certainly would not fit Fr. Rupert. Rage in this context describes a profound sense of enthusiasm, the virtue and daily dynamic that allowed Fr. Rupert to engage life fully right up to the last second of his 95 years.

For all we know, Fr. Rupert is this very moment sitting at the Master’s table, and the Master is serving him. He always seemed to enjoy on occasion sitting at the monastic head table, so no doubt he would enjoy the step up. The somber truth is, however, we do not know factually what happens after death. We hope and we pray, but in fact what happens after death is shrouded in mystery.

In his Rule for monks, Chapter 4 which deals with “the tools for good works,” St. Benedict says, “Day by day remind yourself that you are going to die. Hour by hour keep careful watch over all you do, aware that God’s gaze is upon you wherever you may be” (RB 4:47-49). Since factually we begin dying the very day we are born, I like to think that St. Benedict is really attempting to focus our attention on the fullness of life which reaches its crescendo at the moment of death.  He is not referring simply to the final act of death itself. St. Benedict is admonishing us to pay careful attention to how we live. Life is a glorious gift from God. Do not squander even one moment of it. We do not know when the Son of Man will come and our life will be completed through death. Fr. Rupert took this teaching of St. Benedict very seriously because he was a faithful and obedient monk.

Prepare as he might, Fr. Rupert did not know that his moment of death would be on Saturday, January 14, 2017, around 5:00 a.m., as he was getting dressed for action with his lamps lit. If he had known, no doubt his “Blessed Rage for Order” would have included detailed instructions setting forth how everything was to be done. Throughout his long 95 years Fr. Rupert focused his energies far more on life than on death.  It was precisely by focusing on life that, in fact, he prepared for death. In that long preparation, Fr. Rupert taught us some very important lessons.  Sometimes he used words, but most of the time he taught by example:

n  Lesson one: Live life to the fullest. It is an amazing gift from God.

n  Lesson two: Do not be overwhelmed by the many hardships you may encounter along life’s journey, but trust in the healing processes of life which constantly manifest the grace of a loving God.

n  Lesson three: Do not be afraid to try new things at any age. When you can no longer ride your bicycle, get a tricycle and keep on pedaling.

n  Lesson four: Be dressed for action and have your lamps lit.