The trouble with Christmas 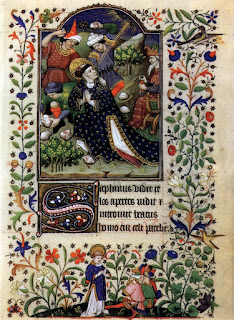 NOTE: The following is the homily delivered this day in the Archabbey Church by Fr. Guerric DeBona, O.S.B., on this Feast of St. Stephen. Here, he considers the troubling juxtaposition of the joy of Christmas with the bloody martyrdom recalled in the feasts which fall within the Christmas Octave: St. Stephen, the Holy Innocents on December 28, and St. Thomas Becket on December 29.


***
I will never get the Christmas Octave. I don’t know about you, but these days following the joyful celebration of the Lord’s Nativity continue to baffle me.

Unlike the Easter Octave, these days seemingly lack a sense of continuity, happiness, and peace certainly present in the eight days celebrating the Lord’s Resurrection; that time cascades us though Christ’s appearances, echoes the Spirit’s power in the Acts of the Apostles, and draws the Church into the transcendent sequence Victime Pascale Laudes.

By contrast, after unbundling the joy of yesterday’s solemnity, the Church today wears red—not to extend yesterday’s peace as much as to razor us jarringly into the often gruesome deaths of martyrs. Stephen, Thomas Becket, and the Holy Innocents create a path for the Christian community which resembles nothing less than wading through rough terrain with more than occasional glimmers of dangerous broken glass.

Paradoxically, it would seem as if secular culture excels at extending the joys of Christmas.  People receive bonus checks and often have off several of the days following Christmas to spend with their families. Not a few parents will be gingerly assembling a young child’s doll house or mustering instructions for the latest video game. There will be visits to the Miracle Mile in Chicago or the Ice Rink at Rockefeller Plaza on Fifth Avenue, not to mention office parties and open house get-togethers amid the dazzling lights on Christmas trees. These are the “Partridge in  a Pear Tree” days of “four calling birds, three French hens, and two turtle doves.” They delightfully extend Christmas Day into not just a few, but 12; people of good will then are all led back to the stable and join the Wise Men on the Epiphany.

Sounds like a good idea to me; nobody ever dies when friends raise a fluted glass of asti spumante and kiss under a mistletoe. So, I ask again: who put the bloody Octave in Christmas?

Well, I will hazard a guess. St. Stephen, Deacon and Proto-Martyr, put the Octave in Christmas by kick-starting sober Christianity’s service written in blood. The difference between the Easter Octave and these days following Christmas is that this Octave concerns witness while Easter realizes its fulfillment.

Stephen’s diaconate of service and testimony becomes linked with Christ’s own witness when the Lord says in today’s Gospel (Matthew 10:17-22): “You will be hated by all because of my name, but whoever endures to the end will be saved.” These are sober words about real life Christian testimony, which traces its origins to St. Stephen. And indeed, the account of Stephen’s stoning in Acts (6:8-10; 7:54-59) mirrors Jesus’ own self-gift and surrender and service.

Ironically, in Acts, Luke uses the word “martyr” or “witness” to describe the folks who laid down not their lives, but their garments at the feet of the arch-persecutor of the Church, Saul of Tarsus. Clearly, there are many ways of witnessing, but the only authentic testimony is linked to Christ’s own. As the responsorial psalm today reminds the Church, we are taken up into Christ’s sacrifice by the witness of the true martyr Stephen: “Into your hands, O Lord, I commend my spirit.”

So Stephen’s death, which we commemorate this day, sets the tone for what we rightly call the Christmas Octave because the witnesses who follow the Lord’s Nativity make his coming in the flesh an ongoing historical reality. By contrast, the office parties, the new toys, and the holiday sales will all be left as so much tinsel on the ground, together with last year’s Christmas tree. Jesus’ less than charming admonition to his disciples acknowledges the reality of his coming a human being in time, in a world which did not receive him.

His disciples will certainly provoke wrath with their testimony because witness is, by definition, never done in secret. Witnessing must become proclamation, which Stephen himself does in recounting Israel’s history in a new way, now that the Messiah has come. “A clear and unequivocal proclamation,” Pope Paul VI says, is the result of witness because “there is no true evangelization if the name, the teaching, the life, the promises, the kingdom and the mystery of Jesus of Nazareth, the Son of God, are not proclaimed.” Even in his last breath, Stephen proclaims the name, as he asks the Lord to receive his spirit.

The Feast of Stephen asks us to exchange our white baptismal garment for a red one. The witness of monastic life each day begs that the Lord receive our spirit in service and fraternal charity.

I have a sense that sincere and authentic witness as proclamation is becoming more and more urgent these days for the Church as it evangelizes the Word become flesh in this culture. Some say we are currently living in an environment of post-truth, where lies and falsehoods traffic as history. Social media can fabricate and weave and unweave stories in a tapestry which rivals Penelope’s long-suffering stitching in Ithaca as she waits for Odysseus to return.

Until Christ comes again, it is the Church’s mission to be at the ready to unravel lies, proclaim the truth, and retell history through the lens of God’s coming in the flesh: good news to those held captive by poverty and injustice, liberty to prisoners, sight to the blind. And our lives and speech will proclaim that truth again and again, just like the first martyr.

May St. Stephen, deacon and proto-martyr, make us better witnesses to the Kingdom and to the Anointed One who has so sublimely come to bring that Good News to our heart’s threshold.
Posted by Br. Francis de Sales Wagner at 4:34 PM