Do we need God? 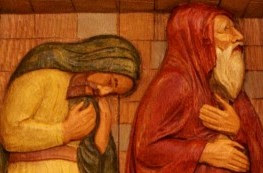 Some of the descriptive words employed by Scripture’s inspired authors in certain passages are telling in regard to humanity’s never-ending struggles. For example, Sirach (35:12-22) speaks of the poor, the oppressed, orphan, and widow. St. Paul is imprisoned and knows that “the time of my departure has come” (2 Timothy 4:6-8, 16-18). He also is lonely—“All deserted me,” he says. Meanwhile, in Luke’s Gospel, the self-righteous Pharisee’s prayer derides those whom he perceives as thieves, rogues, and adulterers (18:9-14).

Where do we see ourselves here in relation to God? In one way or another, and at one time or another, these terms describe many of us.

Whatever the case may be, the key to our approach to God lies not in perceived perfection, but in true humility. Our hope comes in the most unlikely of persons: in the passage from Luke’s Gospel, Jesus points to the tax collector, considered at that time to be the most despicable of all human beings. There, in the corner of the Temple, he humbly acknowledges who he is and asks for God’s merciful assistance. The tax collector—though far from perfect—recognizes his need for God, and so is justified in God’s sight.

The self-righteous Pharisee, on the other hand, has done many commendable things, but takes credit for them all himself. He doesn’t really need anyone, including God, in his mind. And so, Jesus says that it is the lowly tax collector (a sinner!), and not the haughty Pharisee (who did everything right!), whose prayer is heard. As Sirach points out, “the prayer of the humble pierces the clouds.”

A truly humble person, the author of The Cloud of Unknowing said, “stands in the truth with a knowledge and appreciation for himself as he really is.” When we display that kind of transparency and honestly acknowledge our utter dependence on God, as the tax collector does, the Lord stands by us and gives us strength—and the “crown of righteousness” awaits us no matter who we are.

Thanks be to God.