The immensity of small 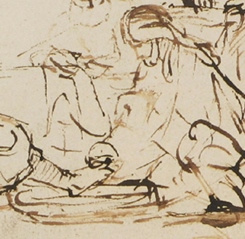 God’s love for humanity is so big, so immense, and so high, that he makes himself small, insignificant, and low to lift us up. In John’s Gospel (13:1-15), we are told that Jesus, the Word made Flesh, at supper before the feast of Passover, “got up from the table, took off his outer robe, and tied a towel around himself,” and then began washing the disciples’ feet.

God stoops down, literally taking the form of a slave, to cleanse those enjoying the banquet with him. In doing this, he strips himself of divine privilege and wraps himself in the towel of humanity.

However, Jesus does much more than simply wash the disciples’ feet. This action symbolically illustrates what he will do in reality on Good Friday, when he will be stripped of his garments and nailed to a cross to cleanse and free humanity—just as the slaughtered lamb at Passover saved the children of Israel in Egypt. In doing so, he offers all a seat at the heavenly banquet (cf. Exodus 12:1-8, 11-14; 1 Corinthians 11:23-26).

All this, of course, echoes the famous Christian hymn in St. Paul’s letter to the Philippians (2:7-8):

He emptied himself,
taking the form of a slave,
being born in human likeness.
And being found in human form,
he humbled himself
and became obedient to the point of death—
even death on a cross.

With this posture in mind, during the celebration of the Evening Mass of the Lord’s Supper on Holy Thursday, we recall in a special way God’s self-sacrificing love for us as we commemorate his Passion, Death, and Resurrection. God stoops down to us, allows himself to be broken and shared among us, so that we who are so broken may, together, become the whole Christ, blessed and shared with all.

Like Peter, who at first won’t allow Jesus to wash his feet, we who are small want a God bigger than us—perhaps because that would “let us off the hook” in so many respects (because if God is not human, then we humans certainly cannot be expected to model the divine!). Though God is bigger, he becomes small enough to be placed in our hands and on our tongues in the Eucharist. Kneeling before his disciples at the Last Supper, stripped of all dignity on the cross, and in the form of bread and wine in the Eucharist, the Son of God gives us his very self so that we may live in him, and he may live in us.

Then, Jesus asks us, as he did the apostles:

“Do you know what I have done to you?”

Our honest answer must be: “No, not really.”

However, our honest prayer can be: “Not yet. Wash me.”

Sometimes growing in spiritual maturity means merely recognizing our capacity for it—and being small enough to ask for it. Stooped down, broken and shared in love for the life of the world, we are raised as the Body of Christ higher than we ever imagined.


Excerpted from Grace in the Wilderness:
Reflections on God's Sustaining Word Along Life's Journey
by Br. Francis Wagner, O.S.B., Abbey Press, 2013
Posted by Br. Francis de Sales Wagner at 8:31 AM