Arise! Shine, for your light has come

"By becoming man, the Word
renews the cosmic order of creation;
By coming into the world, the eternal Word
invites us to the feast of his light."
St. John Paul II


My earliest aspiration as a small child was to be an astronaut. Well, that obviously didn't come to fruition -- though it was fun to pretend going to the moon in spaceships constructed with kitchen chairs, blankets, and assorted cookware. That was in the late 60s and early 70s, when NASA's Apollo space program was still going. Space travel was still a relative novelty at that point. One of my earliest memories is watching on television the Apollo 11 mission of landing the first human beings on the moon in July 1969 (when I was nearly 4 years old). I was fascinated by it all.

Many of the photographs of Earth taken by the Apollo astronauts and their forerunners are still breathtaking and very much suitable for contemplating "higher realities." Of course, in this age of satellite images and instant communication, such photographs are easily taken for granted today. Still, they remain as stunning and as historically significant as when they were first taken. The "Blue Marble" photograph of Earth, taken by Apollo 17 astronauts in 1972 (shown alongside this post), is still one of the most recognizable images in history. Although portions of our planet had been previously captured on film by other Apollo missions and satellites (a rocket-launched camera provided our first partial view of Earth in 1946), the "Blue Marble" is the first "full-view" image of the Earth taken from space.

In any event, those years of space exploration afforded the human race its first opportunity to look back at itself as unique inhabitants of the same small planet within a seemingly endless universe. Such a "look in the mirror" can provide sorely needed proportion to our human struggles -- and hopefully, a sense of compassionate solidarity. Then, there are the even bigger questions -- "Who are we?" and "Where did all this come from?" and "What is the purpose?"

So, what does all this have to do with Christmas? Well, today we celebrate the incarnation of Christ, the birth of a Savior into this very world we inhabit, into this human history that is still unfolding. In that instant, with Christ later fulfilling from the cross his plan of redemption for all humankind, God "re-created" us after the pattern of the first creation, with a twist -- he became one of us. All God asks is that we accept within our hearts the gift of Light that he offers. Then, when Christ comes again, God will look upon all he has remade, and call it very good.

In 1968, the astronauts on the Apollo 8 mission became the first to orbit the moon (they did not land). Thus, they were the first human beings to see the Earth from space as an entire planet, and the first to witness "earthrise," which they filmed. And on a special Christmas Eve television broadcast, the Apollo 8 astronauts shared this experience with the world while reading the first 10 verses from the Book of Genesis (something that is unlikely to ever happen again). The video above replays this moment in our history and offers -- 47 years after it was recorded -- some images and thoughts still very much worthy of reflection. Indeed, for all of us who inhabit this strange planet in this vast universe, the Creator's words still echo and knock on the doors of our hearts: "Let there be Light!"


A Light-filled Christmas and joyful New Year to all.
May it all be very good! 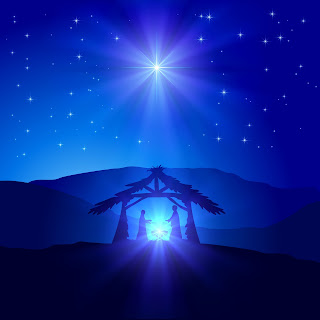 "I am the light of the world. Whoever follows me
will not walk in darkness, but will have the light of life."
John 8:12
Posted by Br. Francis de Sales Wagner at 6:24 AM