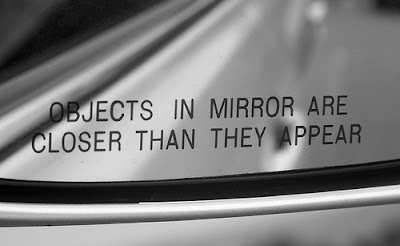 Appearances can indeed deceive. Reality is often disguised, requiring a depth of perception beyond ordinary means. The sun rises in the east and sets in the west each day, seeming to cross from one end of the sky to the other. We know that’s not really true, despite all appearances. The sun is stationary. The revolution of the Earth, which in turn orbits the sun, makes it seem as though the sun is moving. In reality, the Earth is moving.

Scientific knowledge helps us understand the universe which we see and live in. The knowledge of faith helps us enter into the mystery of the spiritual reality that underlies and infuses the universe which we see and live in. For Catholics, of course, there is no greater mystery than that of the Eucharist, which is the source and summit of our faith. In the Eucharist, we receive the Body, Blood, Soul, and Divinity of Jesus Christ under the species of ordinary bread and wine. What we see is not all we get! And we get more than we could ever imagine.

Eucharistic themes are replete throughout Scripture, and they unfold for us during the liturgical year at Mass in the Liturgy of the Word. In 1 Kings 19:4-8, for example, the prophet Elijah is sustained and strengthened for his journey by food and drink provided by God. In John 6:41-51, Jesus tells a skeptical crowd: “I am the living bread that came down from heaven. Whoever eats of this bread will live forever; and the bread that I will give for the life of the world is my flesh.”

Meanwhile, Ephesians 4:30-5:2 conveys to us the true meaning of Communion with God the Father, Son, and Holy Spirit: “Put away from you all bitterness and wrath and anger and wrangling and slander, together with all malice, and be kind to one another, tenderhearted, forgiving one another, as God in Christ has forgiven you. Therefore be imitators of God, as beloved children, and live in love, as Christ loved us and gave himself up for us.” In other words, we receive Christ to become Christ. If we are what we eat, as the saying goes, we must become what, in faith, we receive in the Eucharist, as St. Augustine said: “You are the mystery that is placed on the Lord’s table. You receive the mystery that is yourself. To that which you are, you will respond.”

Those who confronted Jesus in the sixth chapter of John’s Gospel, murmuring about his claims of being “the bread that came down from heaven,” had not yet opened their hearts to receive the knowledge of faith and see the spiritual reality of what he was saying. Their focus was only on what they could see with their own eyes. “Is this not Jesus, the son of Joseph, whose father and mother we know? How can he now say, ‘I have come down from heaven’?” They saw only the species in front of them, not the Presence. Appearance deceived them.

People of that time, incidentally, also believed the sun revolved around the Earth. Humanity had a lot to learn on many different levels. We still do:

Now we see in a mirror, dimly,
but then we will see face to face.
Now I know only in part;
then I will know fully,
even as I have been fully known.
-- 1 Corinthians 13:12

Excerpted from Grace in the Wilderness:
Reflections on God's Sustaining Word Along Life's Journey
by Br. Francis Wagner, O.S.B., Abbey Press, 2013
Posted by Br. Francis de Sales Wagner at 9:41 AM