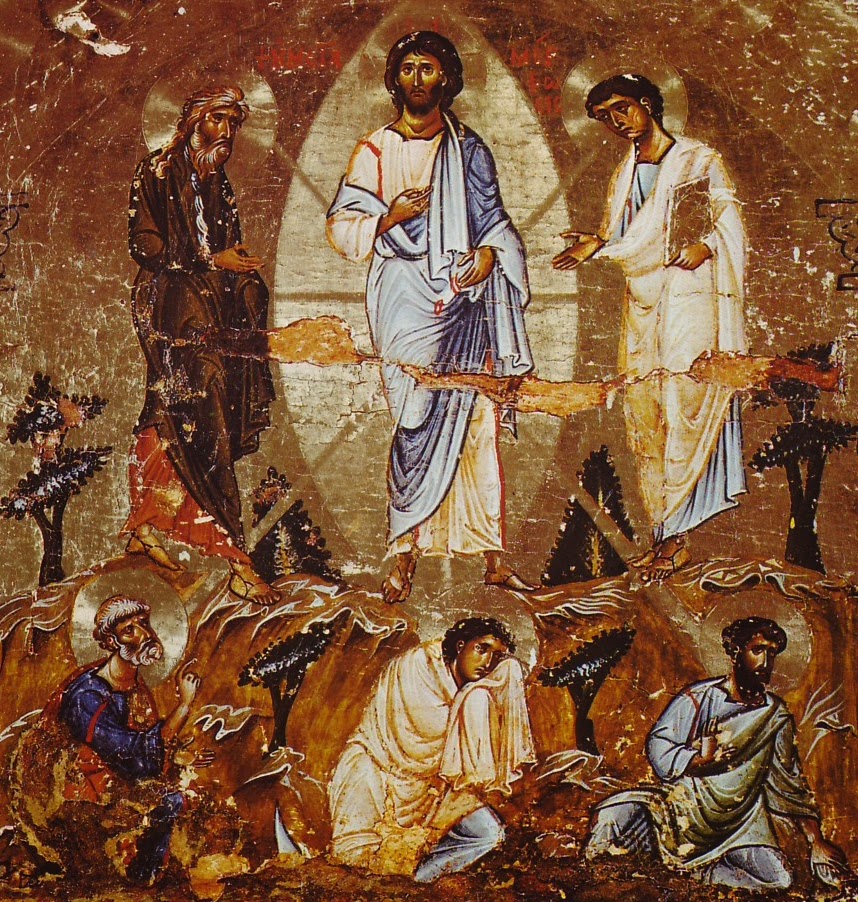 NOTE: Each week during Lent, I will post a short reflection on the Sunday Gospel passage--a little food for prayerful thought to go along with our fasting. -- Br. Francis.


***
In the Gospel reading for the Second Sunday of Lent (Mark 9:2-10), Jesus is transfigured before the apostles Peter, James, and John in a sight almost too wonderful to behold. Appearing with him are Elijah and Moses, representing the Prophets and the Law, which are fulfilled in the person of Christ, the Son of God (cf. Luke 24:44; 4:24).

An important thing to keep in mind while reading and reflecting on this passage is what immediately precedes it. In Mark 8:31—9:1, Jesus predicts his passion and death, and outlines the self-sacrificing conditions of authentic discipleship. It is only after this that he takes Peter, James, and John—three apostles who will later take on important leadership roles in the early church—“up a high mountain apart by themselves.”

Notice the distinct Trinitarian elements in Mark’s account: Three Apostles; the representation of Law, Prophets, and Fulfillment; and finally, manifestation of God the Father, Son, and Holy Spirit. In a scene remarkably similar to that of the baptism of Jesus, a cloud descends, and from it a voice declares, “This is my Son, the Beloved; listen to him!” God reveals himself to the three apostles, giving them a brief glimpse of Christ in his glory, and connecting his appearance with all that has happened before him throughout salvation history.

For the moment, Peter, James, and John are simply terrified and mystified. Later, after the Resurrection, the Ascension to God the Father, and the descent of the Holy Spirit at Pentecost, this will all make more sense to them as they begin their work of laying the church’s foundation.

Most interesting are three words at the beginning of the Gospel passage that are not actually read at Mass from the Lectionary: “Six days later…”

Six days after what?

These three words tie together what follows—the Transfiguration—with what preceded it—the prediction of Jesus’ passion and death, along with the costly demands of discipleship (which Peter, at least, didn’t want to hear). So, seven days after Jesus lays it all on the line and tells his disciples what to realistically expect, he reveals his glory. The three future leaders of the early church are given a heavenly foretaste of what self-sacrifice in Christ, and through Christ, will mean for all disciples through all ages.

In other words, after the harshness of what was told them six days earlier, on the seventh day, they were given hope.

And that is precisely what we celebrate every Sunday—the seventh day, and the beginning of all the days that follow. We celebrate the hope of the Resurrection that is ours in Christ, and we enter into God’s rest. This was prefigured in Genesis’ story of Creation: God “rested on the seventh day from all the work that he had done. So God blessed the seventh day and hallowed it” (Genesis 2:2-3). On the seventh day, we rest in our hope in the New Creation that comes to us through Christ. We are given a glimpse of the transfiguration that awaits all the faithful who deny themselves, take up their cross, and follow Jesus.

Truly, it is good for us to be here! Today, we behold the Resurrection and the Life, and know that whoever believes in him, even if he dies, will live, and that everyone who lives and believes in him will never die (cf. John 11:25-26).
--Adapted from Grace in the Wilderness
by Br. Francis de Sales Wagner, O.S.B.
© 2013, Abbey Press Publications
Posted by Br. Francis de Sales Wagner at 4:48 AM