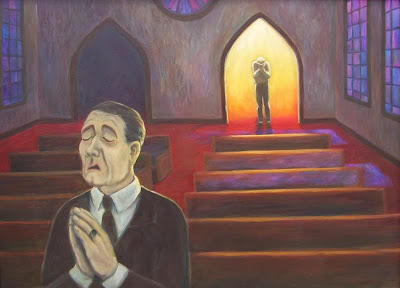 Jesus addressed this parable
to those who were convinced of their own righteousness
and despised everyone else.
“Two people went up to the temple area to pray;
one was a Pharisee and the other was a tax collector.
The Pharisee took up his position and spoke this prayer to himself,
‘O God, I thank you that I am not like the rest of humanity—
greedy, dishonest, adulterous—or even like this tax collector.
I fast twice a week, and I pay tithes on my whole income.’
But the tax collector stood off at a distance
and would not even raise his eyes to heaven
but beat his breast and prayed,
‘O God, be merciful to me a sinner.’
I tell you, the latter went home justified, not the former;
for whoever exalts himself will be humbled,
and the one who humbles himself will be exalted.”

This parable from today’s Gospel does not merely recall the situation 2,000 years ago in . It is played out every day all over this planet in our own times—in our homes, workplaces, schools, communities, in the media, and especially in our churches. The first sentence makes the point that the story goes on to illustrate: “Jesus addressed this parable to those who were convinced of their own righteousness and despised everyone else.” That same message is for all of us today.

The Pharisee in each one of us likes to think that we’re always correct, that we are doing what is right, and that some of those around us are clearly wrong, and essentially beneath us. We may pay lip service to God, but inwardly we congratulate ourselves for our virtues while condemning others for their shortcomings. This is the sin of pride committed first by our parents in the Garden of Eden, who sought to “be like God.” The Pharisee in this parable, although socially considered devout and “religious,” thinks so much of himself that he does not really need God, let alone the rest of humanity.

However, in our more honest and reflective moments, the tax collector in each one of us makes no attempt to appear good in the eyes of others, to take credit for any virtue, or to point fingers at what is wrong with someone else. Rather, we simply and humbly acknowledge who we truly are, and place our confidence in God’s mercy alone. The tax collector in this parable, although socially considered the most rotten of sinners (like the prodigal son and the good thief on the cross, Luke 15:11-32 and 23:39-42), knows who he really is, and that he needs God.

And so despite all appearances, Jesus says, the sinner is justified, not the self-righteous.

This is not about beating ourselves up for our faults and failings. Rather, it is about honestly owning up to who we really are in God’s sight, aware of our need for his mercy and grace for all the good we accomplish. As the author of the Cloud of Unknowing puts it:


A man is humble when he stands in the truth with a knowledge and appreciation for himself as he really is. And actually, anyone who saw and experienced himself as he really and truly is would have no difficulty being humble, for two things would become very clear to him. In the first place, he would see clearly the degradation, misery, and weakness of the human condition resulting from original sin. From these effects of original sin man will never be entirely free in this life, no matter how holy he becomes. In the second place, he would recognize the transcendent goodness of God as he is in himself and his overflowing, superabundant love for man. Before such goodness and love nature trembles, sages stammer like fools, and the saints and angels are blinded with glory.

The truth is that while God’s salvation is offered to all, only those who genuinely acknowledge their sinfulness and look to God will be justified. Faithfulness is required, not perfection. No sinner is beyond redemption. In fact, Satan doesn’t bother with the truly wayward (God is the one who pursues those in that state). Rather, Satan’s primary purpose is to lure the devout and “religious” into a state of mind that exalts their own righteousness while holding others in disdain. Illusion is Satan’s game.

Those who are sincerely committed to the spiritual life, and those who are engaged in lives of ministry and service--whether in the clerical or lay state--are perhaps more subject than anyone to this temptation of spiritual pride. Satan would like to make Pharisees of us all.

This calls to mind a passage from C.S. Lewis’ classic, The Screwtape Letters (if you haven’t read the whole book, it’s well worth your time, conveying spiritual truths in biting, yet entertaining fashion). In this passage, the demon-trainer Screwtape advises demon-in-training Wormwood about his human “patient” (the “Enemy” referred to is God):


One of our great allies at present is the Church itself. … It is quite invisible to these humans. … When he gets to his pew and looks round him he sees just that selection of his neighbors whom he has avoided. You want to lean pretty heavily on those neighbors. Make his mind flit to and fro between an expression like “the body of Christ” and the actual faces in the next pew. It matters very little, of course, what kind of people that next pew really contains. … Provided that any of those neighbors sing out of tune, or have boots that squeak, or double chins, or odd clothes, the patient will quite easily believe that their religion must therefore be somehow ridiculous. At his present stage, you see, he has an idea of “Christians” in his mind which he supposes to be spiritual but which, in fact, is largely pictorial. ... What he says, even on his knees, about his own sinfulness is all parrot talk. At bottom, he still believes he has run up a very favorable credit-balance in the Enemy's ledger by allowing himself to be converted, and thinks that he is showing great humility and condescension in going to church with these “smug,” commonplace neighbors at all. Keep him in that state of mind as long as you can.

O God,
be merciful to me,
a sinner.
You promise
that the prayer
of the lowly
pierces the clouds.
Make me
humble of heart
as I pour myself out
like your Son.
Help me
to keep the faith,
to finish the race.
Stand by me
and give me strength,
and bring us all safely
to your heavenly kingdom.
Amen.

Agnus Day appears with the permission of www.agnusday.org
Posted by Br. Francis de Sales Wagner at 11:47 AM