"Let us begin this journey together.
It is a journey of friendship, of love, of trust, and faith.
Let us pray always for one another.
Let us pray for the whole world.
Let us have a big brotherhood."
Pope Francis
﻿ 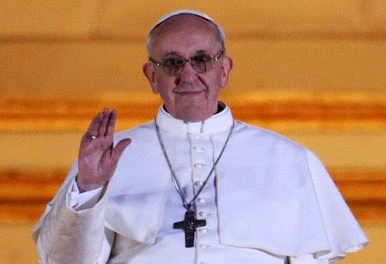 ﻿ ﻿
As you are likely aware by now, we have a newly elected Holy Father--Pope Francis, who just hours ago was simply Cardinal Jorge Mario Bergoglio of Argentina. He is 76, a Jesuit, and the first pope to be chosen from a Latin American country. He is the first pontiff to take the name Francis, and by all accounts that I've read, he's considered to be a very simple, humble, prayerful man. This was certainly projected by his appearance on the balcony of St. Peter's Basilica in Rome shortly after his election, when he began his remarks by leading the crowd in prayer for his predecessor, Benedict XVI, and then said: "I would like to offer you my blessing, but I would like to ask a favor first. I would like to pray to the Lord so that the prayer of the people blesses also the new pontiff. Let us pray in silence your prayer for me..."

He then bowed his head while the hordes of people crammed into St. Peter's Square (and watching on TV elsewhere around the world) silently prayed for their new Pope. I was especially struck by that--a Pope asking the people to pray for him before he imparted his first papal blessing. I don't know whether anything like that has occurred before, but it was a powerful and beautiful moment--one filled with joyful, hopeful silence in God alone. That seems a very bright beginning to me.

[UPDATE/THURSDAY MORNING: I have been the recipient of some good-natured ribbing by a number of my confreres in the monastery over the Pope's new name. At dinner last night, one said to me: "It's a good thing the new pope didn't take the name Francis de Sales, or you would be difficult to live with!" That very well could be. Fortunately, we have not been presented with that reality. Pope Francis himself, on the other hand, spent his first day "on the job" in Rome today continuing to do what he began last night--being himself, and offering a refreshing simplicity and humility in his approach (he even took the bus back to the hotel with the other cardinals after the election rather than the papal wheels!). Such a modus operandi will certainly make things a little difficult for those who are used to "the way we do it." Pope Francis obviously intends to do things another way, and is not much interested or impressed with pomp and circumstance. Read more about his first hours as Pope and his simple approach to things by clicking HERE. -- Br. Francis]

This morning, I was holed up in my cell working on an upcoming conference I'm to give in the seminary, and also trying to get some reading out of the way for the spiritual direction course I'm in. After lunch in the monastery refectory, I decided to take a brisk walk before diving back into it, first stopping at my Abbey Press office to check on a couple things (and water my plants) before heading back to the monastery. As I approached the door around 1:15 p.m. or so, Saint Meinrad Time, Br. John Mark emerged from one of the school buildings and informed me that there was white smoke over the Sistine Chapel in Rome, signifying that a new pope had been elected. This was signficant because--like many churches throughout the world--we planned to join the universal announcement by ringing the church bells here. So the two of us went into the Archabbey Church, where we were joined by several other monks. Together, we rang all six bells for a full five minutes.

So, I was fortunate enough to be in the right place at the right time to ring in the new pope! At Vespers this evening, the Abbot will make a formal announcement of Pope Francis' election, and we will all sing the Te Deum while all six bells peal again. At the conclusion of Vespers, after the Angelus, the bells will ring again (I will be helping again). So, there's been a lot of bell-ringing today.

In any event, after the first set of bells had been rung this afternoon, I was torn between returning to my work or watching the event live on TV. As much as I really needed to get some work finished, I just couldn't let history unfold unattended, so I joined a few monks who had gathered in the monastery TV room and waited for the official introduction of the new pontiff. I'm glad I did.

When I did return to my room to compose this post, I discovered a number of email and phone messages waiting for me--all exclaiming excitement over the pope's new name--Francis. Of course, I think it's an excellent choice! I must point out, however, out that the Holy Father has taken the name of St. Francis of Assisi. My patron saint is St. Francis de Sales--though his baptismal name was in honor of Francis of Assisi. In a way, I guess I can claim them both.

I do find it interesting personally that St. Benedict and St. Francis (both of the figures mentioned above) have had a great deal of influence on me spiritually these last 10 years as I experienced my conversion, discerned religious life, and became a Benedictine monk. In the spring of 2006, before I entered  the monastery, I had the opportunity to travel to Italy and was in Assisi, where I prayed at the great saint's tomb. Among other things, St. Francis of Assisi is known as the patron saint of conversion, which his own life story reflects. At that same time, I was working at The Blade in Toledo, Ohio, and across the street was the very first cathedral in the Diocese of Toledo, St. Francis de Sales Parish (which is now a chapel). St. Francis de Sales is the patron saint of journalists. In 2010, shortly before making solemn vows as a monk of Saint Meinrad, I had another opportunity to travel in Europe, and on this occasion, I spent time at both Sacro Speco, where St. Benedict had lived as a hermit, and Annecy France, where St. Francis de Sales lived and is buried. And now, the two popes that have been elected in those 10 years have taken the names Benedict and Francis. And here I am, a Benedictine named Francis. Interesting how things work out sometimes.

The name Francis, I suspect, was chosen by the new Pope for significant reasons that we may not ever truly grasp, but it sends a good signal. As you surely know, it was at the small church of San Damiano near Assisi in the 13th century that St. Francis experienced his calling before a crucifix, which spoke to him these words: "Go Francis, and repair my Church, which is in ruins."

In a homily delivered in 2010, then-Pope Benedict XVI had this to say about the episode: "At that moment St. Francis thought he was called to repair the small church, but the ruinous state of the building was a symbol of the dramatic and disquieting situation of the Church herself. At that time the Church had a superficial faith which did not shape or transform life, a scarcely zealous clergy, and a chilling of love."

Lord, source of eternal life and truth,
give to your shepherd Francis
a spirit of courage and right judgment,
a spirit of knowledge and love.
By governing with fidelity
those entrusted to his care,
may he, as successor of the Apostle Peter
and Vicar of Christ,
build your Church into a sacrament
of unity, love and peace
for all the world.