The third eye of Resurrection 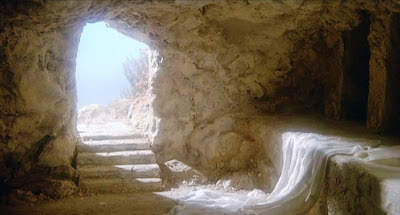 Easter Vigil of the Lord's Resurrection


On that night of his Sabbath rest that first stood between the darkness of the cross and the light of Easter, our Lord Jesus Christ passed over from death to life. We, too, make that passage with him in our Great Vigil. Year after year we repeat these rites and renew our own Passover. The routine has become familiar to us, so much so that it can veil what the mystery of Easter has done for us.

Easter has reversed our misfortune. Of course, we hardly think of ourselves as being in need of a change in fortune. If anything, we lead a fairly comfortable life, notwithstanding the usual problems that occasionally trouble the best of us. Yet in truth, our misfortune as flawed human beings has been reversed, and Easter has made all the difference. It takes some getting used to, this reversal, to adjust our eyes to the light, and to learn exactly how the power of this Easter reversal of misfortune has changed everything.

The women who went to the tomb that first Easter morning offer us an entry into reversal of fortune. For them the experience of resurrection began with a troubled question straight from their own hearts: “Who will roll back the stone for us?” Well aware of their shattered hopes, they felt the weight of their terrible misfortune. We ought not to dismiss lightly their sad mood. Conventional wisdom tells us that in the end, death wins. As the saying goes, two things are certain: death and taxes—and for those who file returns, the appropriately named “deadline” is 10 days away. Our temptation is to avoid the very things that make us sad in this life, either by denying them or by turning them into occasions for a false happiness. The realism of those women arriving at the tomb offers a strong corrective about the misfortune that, for the present time, does infect life in this world. The one whose tomb those women went to visit did not escape the deepest of misfortunes, having been betrayed, mocked, paraded before his enemies, and finally publicly executed as a common criminal.

Even if we ourselves are spared terrible sufferings, others are not. The world knows all too well the extent to which human malice can go. The stone of misfortune seals the fate of too many lives. Like the women who went to the tomb, we, too, ought to ask the realistic question: “Who will roll back the stone for us?” Their experience of Easter began with the painful truth of their own mortality.

But when they arrived, expecting to breathe in the stink of death, they instead found Life itself, untethered from the grave. What began with a question from their mortality progressed to a shock that awakened them—frightened them, actually—into a world that went way beyond their shattered hopes. When those three unsuspecting women visited the tomb, they had their world reversed, like the empty tomb that they discovered. Tombs tame death and keep it caged so that mourners can safely visit it without being swallowed up by it.

But the tomb the women found had been vacated of any remnant of safety, and instead had grown wild with life that left them wide-eyed at the sight. Their honest question was answered by the young man who met them at the tomb: “You seek Jesus of Nazareth, the crucified. He’s been raised; he’s not here!” No wonder the women were dumbfounded. That tomb had literally been reversed, turned inside out.

How true is this Easter reversal for us as well? We may have come to church because that’s what we always do, or it’s what good monks do on Easter. But the words of St. Paul reverse those expectations. “Are you unaware,” he writes, “that we who were baptized into Christ Jesus were baptized into his death? … Consequently you too must think of yourselves as being dead to sin and living for God in Christ Jesus.”

Unless we take seriously our state of misfortune, we have nothing from which to be changed; Easter is then merely a lovely holiday for which a tasty ham and a cute little bunny would do just fine, thank you. But Resurrection is something else altogether. It is the shock of our life and the reversal of our fortune. But before we can grasp abundant life, we have to loosen our grip on limited life. That was the message to the women. Jesus was no longer in the tomb, the realm of death, but in the territory of Galilee, the world, that teemed with new possibilities. The empty tomb changed everything.

The women left the tomb under a mission, to go and tell the others what they had seen—not merely emptiness, but newness. The resurrection had opened for them, as it were, a third eye that would see the whole world in a different light. The third eye of Resurrection is ours, too, and with it comes the ability to see the true joy of life.

In difficult times we expect resurrection to bring unrestrained happiness, relief from every sorrow, the end of sadness, the death of restraint—anything and everything, except the radical scandal that shocks us. But the third eye, opened within us by the absurdity of the empty tomb, gives us the ability to see the world as it should be seen, and so to see the glory of God reflected in it.

With the third eye we are able to see two realities at once, one world within another, as the theologian David Bentley Hart has described it. It “sees the world as we know it, in all its beauty and terror, in its delight and its anguish; and it also sees the world in its first truth, radiant with the beauty of God in every part, innocent of all violence,” as the book of Genesis describes it in the story of Creation, which we heard tonight.

The third eye sees the world “as a mirror of infinite beauty, but as glimpsed through the veil of death; it sees creation in chains, but beautiful as in the beginning of days.” And this sight is the cause of truest joy that does not turn a blind eye to sadness and failure and death, but at the same time sees beyond their limits, because it sees life from the heart of God. Baruch, from whom we heard tonight [3:9-15, 32-4:4], foresaw this joy when he prophesied, “Learn where prudence is, where strength, where understanding; that you may also know where are length of days and life, where light of the eyes and peace.” This joy sent the women on their mission to tell others what they had seen. With both eyes dimmed by sadness they had peered into the empty tomb; with the third eye of resurrection, they looked beyond the emptiness and directly into the heart of God, even in the midst of their sorrow and fear. What they saw reversed, not only their misfortune, but their whole lives.

Brothers and sisters, this night of Resurrection has made all things new for us. Our misfortune of sin has been reversed, so let us speak of peace to any who hate us, and let us forgive everything—for Christ is raised from the dead.

The question that this Easter day puts to us is not what we are to make of resurrection, but rather, what does Resurrection make of us? 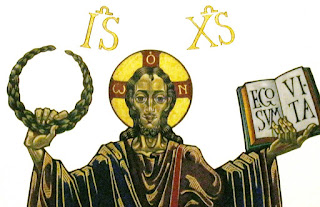