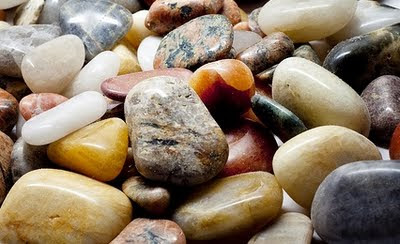 We become persons—the true persons God created us to be in the image of the Holy Trinity, who is One God in Three Persons—in relationship with others. Our destinies are intertwined, whether we can see it or not, believe it or not. We are interdependent, particularly so as Christians.

Recognizing that is one thing. Living it is another. It is not easy.
When I first came to the monastery, I was talking to Br. Martin one day, and he compared living in community (in our case, a monastic community) with a big revolving mixer filled with many stones. Some of these stones are big, some small. Each has a different shape and color, and texture, and some are quite jagged. A wonderful thing happens as the mixer is turned, and all those stones begin scraping and scuffing one another. Over time, they become smooth and round and polished—a few may even become sparkling. This occurs (hopefully) by the grace of God working through our relationships with one another.
In light of today’s readings, as a Christian community witnessing to the world, we must polish one another, but this must be understood correctly. The Church is in the business of saving souls, not in preserving its own life within contemporary social, economic, or political realms. The Body of Christ does not exist for its own welfare, but for that of souls– all souls, throughout the world, for all time. Anything else ultimately corrupts and compromises the Church’s spiritual mission (though God is capable of making “all things work together for good”).
Ironically, those who lose sight of this—attempting to turn the revolving mixer to their own beat—put their own souls at risk. “Those who want to save their life will lose it, and those who lose their life for my sake will save it,” Jesus says (Luke 9:24; similar passages are found in all four gospels). Polemic and finger-pointing have never impressed me (yes, at times, I too have engaged in them). Fundamentalism, whatever its form (and every “camp” has it to some degree) has never worked throughout the course of human history, and has often led to unspeakable crimes against humanity.
All of this is not genuine fraternal correction, the loving care of souls, as today’s readings exhort us to demonstrate. Turning the revolving mixer to one’s own beat (or the beat of a particular camp) without charity and care of souls as its ultimate end is the absolute worst kind of sin, the one that got Adam and Eve into trouble in the first place – PRIDE.
Yes, as Ezekiel says in today’s reading, we are each responsible for warning sinners and helping them turn to God. But in today’s Gospel, Jesus lays out a very measured, practical, and pastoral approach. In the occasion of sin (and he was talking about serious sin, not minor annoyances, offended sensibilities, or ultimately trivial disagreements), we are to take a brother or sister aside privately. Grievances aren’t to be aired publicly or through gossip. If that doesn’t work, Jesus, says, bring a couple of others along – a firmer approach, what we would today call an “intervention.” Last of all, if nothing else works, the matter is to be brought to the attention of the entire community.
Implied throughout is the call for prayer, for “where two or three are gathered together in my name, there I am in the midst of them.” It is also significant that following this Gospel passage in Matthew is the parable of the unforgiving servant, who is punished for his lack of compassion, patience, and mercy when he had been forgiven a far greater amount. In other words, we all fall short of God’s grace, and we must always keep that in mind, whether a fellow sinner repents or not.
I had an uncle (God rest his soul) who loved to collect seemingly ordinary rocks and then cut, shape, and polish them into decorative works of beauty. He had his own shop filled with rocks and tools, and he gave his finished pieces to family members and friends. I still have one in my office at the Abbey Press. It is simply beautiful to look at, more so because my uncle was able to see the hidden beauty within and lovingly draw it out, make it sparkle. There were no sledgehammers in his workshop. He polished with love.
Public accusation, rebuke, and humiliation seem to be increasingly in vogue these days—from both the left and right, and everywhere in-between, whether it’s in the Church or the world. It’s become quite wearisome, and is, quite frankly, the lazy way out. It is applying a sledgehammer with one ear-splitting blow rather than a polishing cloth privately and quietly over many hours, even days or weeks. In one case, the aim is really only to prove that might is right, to prove the other wrong. In the other case, something much deeper and longer-lasting is at stake—gently drawing out the reality of another’s inner Truth, with tenderness and patience.
My uncle—and he was no pushover--cared for his rocks, and the people who would enjoy them. The sledgehammer wants only to drive home a point for its own sake. Both may have good intentions, valid motivations, but ultimately, the sledgehammer seeks its own life, while the polishing cloth seeks life at its own expense, ultimately wearing away.
We are responsible for one another’s salvation, yes, but with a view toward the genuine welfare of the other, not our own, not for the mere sake of "winning an argument." As says in today’s second reading: “Love is the fulfillment of the law.”

This is the way we really and truly sparkle.

Even if a person is caught in some transgression,
you who are spiritual should correct that one
in a gentle spirit, looking to yourself.
Galatians 6:1
Posted by Br. Francis de Sales Wagner at 7:44 PM